Our SSD review today will be on the Toshiba MK4001GRZB 400GB SAS 6Gb/s Enterprise SLC SSD and will be the first to undergo our new Enterprise Test Protocol.

This SSD brings with it some of the best sustainable performance in the realm, and also has recently taken the Grand Prize for Excellence in Energy Efficiency and Conservation from the Japan Energy Conservation Center, so it is definitely a top candidate to introduce our new Enterprise Test Protocol.

The Toshiba Enterprise MKx001GRZB family are 6Gb/s SAS SLC SSDs and there are several key considerations that set this drive out from the pack right off the bat.

First off, there are not many enterprise SSD manufacturers that have embraced 6Gb/s SAS as the primary interface as of yet. With the push already on for 12Gb/s, there is certainly a need to get up to speed, and the Toshiba drive delivers in that respect. Utilizing the SAS interface also allows them the flexibility of dual-port function and other key advantages of SAS that SATA simply does not provide. 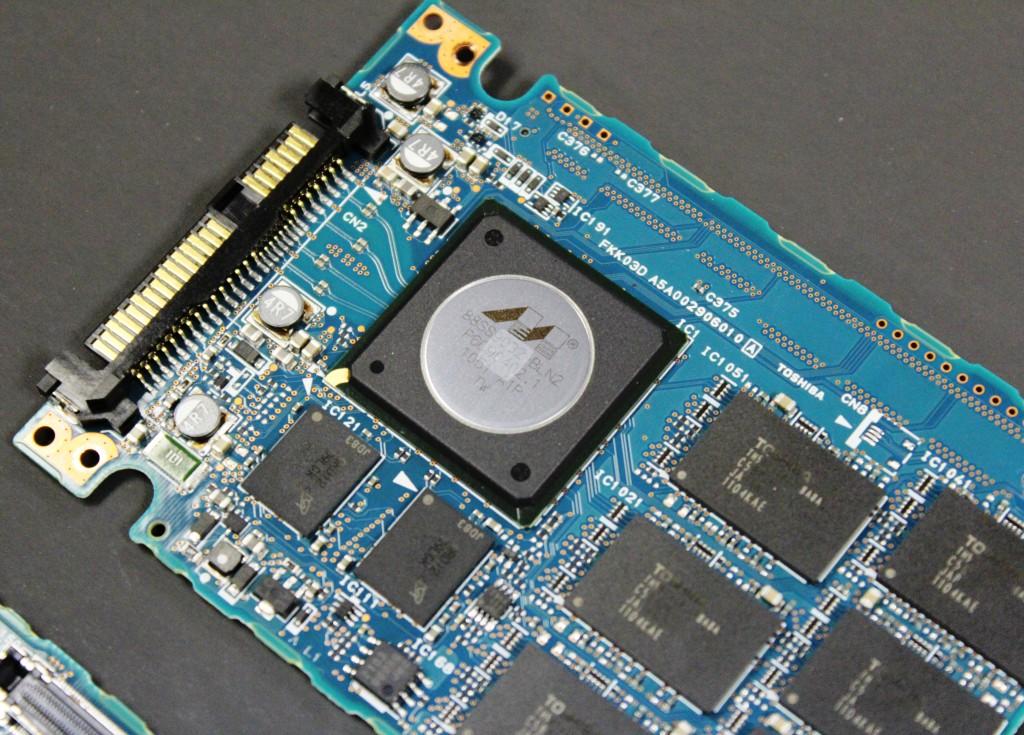 Multipath I/O is a huge consideration for many enterprise applications as this allows Failover in the event of HBA and/or host system failures. SAS affords High-Availability functionality through multipath that is necessitated in mission-critical applications. With higher signaling voltages being used for operation, SAS also enjoys much longer cabling, up to 33ft long, which is 10x the length of present SATA limited to 3 feet in length. SAS also performs very well in server back planes as a result of the higher voltage used for signaling.

With an award-winning 13,800 IOPS per Watt efficiency rating, the Toshiba SSD is geared for power sipping performance. This is essential in data center applications as the overall power consumption of any device is a huge concern. Power consumption also generates heat, so the lowest IOPS/Watt performance surely gets the most consideration in certain applications.

The utilization of 32nm Toshiba SLC NAND flash memory is a big plus as well, with the superior endurance and latency that it brings to the table. Toshiba has the benefit of owning their own fab and this allows them the luxury of utilizing their own NAND. Toshiba actually develops their own firmware for this product in-house as well, which allows them the ability to tailor their device for specific needs.

Many manufacturers are foregoing SLC for eMLC, and even MLC, which can lead to lower price points. There is a tradeoff with those approaches. The endurance of NAND is measured in Program/Erase (P/E) Cycles, and there is a limited amount of writes that can be processed on flash devices.

SLC drives are rated for the highest write endurance at a minimum of 100,000 P/E cycles, with eMLC coming in a distant second at 10,000 to 30,000, and finally MLC with a paltry 5,000. There is definitely room for the different classes of NAND in the enterprise space, but the less durable variants require more careful handling in terms of write loads. For ultimate durability above and beyond all others, and the ability to use the device unrestrained, SLC still reigns supreme.

This type of endurance allows for Toshiba to warranty the device for unlimited writes for the duration of the 5 year warranty period. There are not rated endurance specifications for 200 and 400GB versions of the drive, but there is a 8.2 petabyte endurance listed for the 100GB version. This is amazing as the higher capacity devices should have a multiplication of that number in endurance, as there is simply much more NAND on the devices that would need to wear out. Even comprehending an SSD requiring more than 10PB to wear out is simply mind blowing!

Packaging that type of endurance in a nice package that also boasts 90,000 random read IOPS is quite impressive. Weighing in at over $7000 a device, these enterprise SSDs carry a heavy premium for the longevity and performance that they provide. Deployed in the thousands in massive data centers, much like the one pictured above, there is a tremendous need to deliver on 100% reliability and performance.