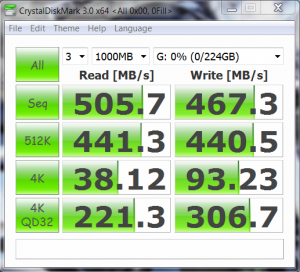 We can easily see how performance of the SSD is very dependent on the type of data that it is being transfered.  The result on the right is what most owners will grow concerned about as this is significantly different than the advertised speeds of 550MB/s read and 500MB/s write.  I have even known people to spend hours re-installing complete systems believing their OS was misaligned when it truly wasn’t.

It is valuable to remember that manufacturers commonly use ATTO Disk Benchmark to arrive at their posted specifications.  Why?  Simply, they know that a very large number of people will base their end decisions on the highest performance posted on the package. Would you believe the average consumer doesn’t even use these ‘high sequential’ speeds even 0.1% of the time?  One of our earliest publishing’s is called, “The Manufacturers Bluff‘ and explains this clearly.

Up until recently, AS SSD was the only benchmark created specifically for SSD testing and it tests in the worst case scenario for the most part with incompressible data.

AS SSD testing is loved by enthusiasts because it tests in highly incompressible data sample as might be representative of movies, music or photographs.  Simply, the Velox V30 contains synchronous NAND flash memory which is ideal for many occupations that manipulate and move large amounts of incompressible data; a few typical professions being video editors, musicians or photographers. This ‘premium’ memory is preferred because it has much better transfer speeds in moving  incompressible data, much unlike the more value conscious SSDs containing asynchronous memory.  Let’s take a look at the AS SSD Copy Benchmark:

Over the last little while, we have been assisting with beta testing new benchmark software called Anvil Storage Utilities which is an absolutely amazing SSD benchmarking utility.  Not only does it have a preset SSD benchmark, but also, it has included such things as endurance testing and threaded I/O read, write and mixed tests, all of which are very simple to understand and utilize in our benchmark testing.  Lets see how the Silicon Power Velox V30 SATA 3 SSD does in Anvil testing:

We can see alot of good things with Anvil Storage Utilities, the first of which seems to be the incredibly fast disk access speeds. For those new to SSDs, these speeds are typically 90 times faster than that of a hard drive and are the main contributor to the difference we see in using an SSD equipped computer.

As well, IOPS in excess of 71, 000 is always nice to see as is the 4k transfer speed of 85MB/s.  Make no mistake; this is definitely an upper tier SSD.