A short time ago we reviewed the Silicon Power Velox V20 120GB SSD which just so happened to be one of the few SATA 2 drives that we had seen in 2011; the world has gone SATA 3. To say the least, it was rather unique as it was the first to contain Hynix NAND flash memory that we had reviewed.

Silicon Power has since sent us their next level in performance, the Velox V30 SATA 3 ‘SandForce driven’ 240GB SSD, requesting our evaluation and review.  How could we resist?

Being a typical ‘SandForce Driven’ SSD, it’s only natural that we would see performance specifications of 550MB/s read and 500MB/s write transfer speeds in the Velox V30 with available capacities of 60, 120, 240 and 480GB.  Standard warranty is three years and availability is a tad limited but we did find the 120GB version on Amazon for $225 . 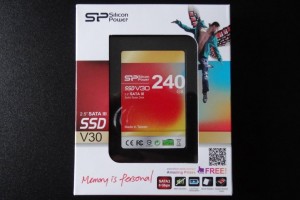 Exterior packaging consists of a compact and colorful exterior which houses a two piece plastic sleeve inside, the sleeve containing the SSD, installation manual, mounting screws and a desktop adapter for installation into a typical full size PC.

The exterior casing of the SSD is constructed of black metal with a base plate that is secured by four screws, one covered by security tape.The front contains the product sticker which highlights that the drive is of notebook form factor, SATA III and is 240GB capacity while the back is void of any identifying features whatsoever.

Once disassembled, the inside of the SSD consists of a green printed circuit board (PCB) which contains the SandForce SF-2281 processor and 16 chips of NAND flash memory. Silicon Power was wise to (this time) go with  Intel 25nm synchronous NAND flash memory, each piece being 16GB in capacity for a total of 256GB RAW capacity.

SandForce firmware needs require one 16GB module to be proprietary which reduces the capacity to the advertised 240GB and final formatting provides the user with 224GB of available capacity for storage.

Somewhat interesting is the fact that we did a search on the NAND flash memory only to have our review of the Kingston HyperX 240GB SATA 3 SSD return immediately.  Both units are similar in their choice of processor and memory.  I wonder how the Silicon Power Velox V30 will fare considering the Kingston is one of our top 3 SSDs reviewed to date.