Just over a month ago, we conducted an analysis of what we thought to be the Comay Venus Pro 3 and, only after the review, were informed that we were actually looking at the Venus 3, an SSD that was not only branded incorrectly, but was also a special configuration for a specific customer.  It appears our orders were mixed up.

Comay apologized for the mix up and promised that we would be receiving a Venus Pro 3 soon enough where we could validate some vicious ‘SandForce Driven’ performance first hand.

Although it wasn’t unusual that an improperly labeled product reach our hands as it had occurred twice prior in the past year, we found it out of place that the product received was actually configured specifically for one of Comay’s volume customers.  Unknown to most, many of today’s SSDs are typically ‘hands off’ for the entire manufacturing process up until it comes to product branding which may or may not be done by the company themselves. In the case of our previous received and misrepresented SSDs, both were unreleased ‘first samples’ where the company literally placed the sticker on by hand as mass volume had yet to be achieved.

Comay is different and we learned that through several subsequent conversations with both Synetic Inc and CoreRise Electronics, CoreRise being the responsible company for Comay SSD manufacture.  CoreRise, it seems builds their own SSDs and, having their own manufacturer and assembly facility, is able to configure any number of their own SSDs to a customers specification. At present, CoreRize has 19 different SSDs available to consumer, business or enterprise, these available in just about any capacity one can imagine and with several different controllers, one of these controllers (or processors) of course being of LSI SandForce design. 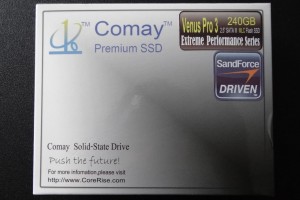 Exterior packaging does a great job of describing the product and details two things that we don’t often see in any consumer based SSD which is power loss data as well as overload protection for your SSD.  Components are also listed with the SSD being SandForce Driven and utilizing premium synchronous NAND flash memory.

Inside the SSD packaging we find the SSD itself, a data cable and a User Guide that details Comay’s three year warranty as well as a very detailed installation tutorial that even ventures into setting one’s BIOS for AHCI mode.  Only after reading this did we realize how many instances of failed installations we have assisted in only to attribute the main cause to a system being in IDE mode rather than AHCI.  Conversely, we have never seen instructions assisting with this issue in any manufacturers SSD installation tutorial; at least not until Comay.

The User Guide also speaks to the Venus Pro 3’s uninterruptable power source as well as its overload protection, two characteristics we never see in SSDs.  The In-Drive UPS can keep working four times longer than it would normally take to flush the cache data back to NAND flash memory should a power failure occur.

As well, the Venus Pro 3 can shut the SSD down should such things as power spikes, short circuit, thunder, host power problems and any other power related issues occur, thus protecting the SSD from damage.

The exterior of the Venus Pro 3 is constructed of a brushed aluminum shell with the Comay name on the front and a very detailed brand sticker on the back. A quick click on any of the pictures will display a high resolution image for your viewing pleasure.

Inside, we find the PCB with the LSI SandForce SF-2281 processor and 16 pieces of Intel 25nm 16GB synchronous NAND flash memory, eight pieces being located on each side of the PCB.

On the back of the PCB, we also find the Cap-XX HZ202 5.5v Super-capacitor which, as already described, ensures that no data is lost should a power outage occur.

Total RAW capacity of the SSD is 256GB, however, LSI SandForce over provisioning and firmware needs require a 16GB memory module for their use, reducing the unformatted capacity to the advertised 240GB.  Once formatted, 224GB of storage is available to the user.