SanDisk has finally jumped full tilt back into the world of SSDs and our report today will introduce you to the use of yet another brand of NAND flash memory that we haven’t seen in any SATA 3 SSDs, at least that I am aware of.

The benefit, of course, is that this memory is owned by SanDisk.  This allows them a great deal of flexibility with respect to client SSD pricing, so much so in fact, that they can actually force competitors to reduce SSD prices in order to remain competitive.

There is, of course, a key here that many might not initially think of and that key comes in the name of LSI SandForce.  LSI SandForce is a powerhouse in the SSD arena and remains king of the hill with respect to client SSD performance specifications.  This position is important as most consumers seek an SSD of the highest performance, first and foremost.

Manufacturers recognized this some time ago and all jumped aboard the SandForce train, all but Samsung and Crucial that is.  Thats right.  The only main stream client SSD manufacturers that haven’t invested in SandForce are Crucial/Micron and Samsung which attests to LSI SandForce popularity.  Now, imagine if you will, that SanDisk prices their ‘SandForce Driven’ SSDs below that of all others, all but one (Intel) who are forced to pay higher premiums for NAND flash memory externally.  The SanDisk Extreme couldn’t have come at a better time, wouldn’t you agree? 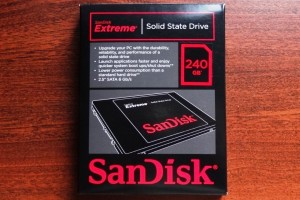 The SanDisk Extreme 6Gbps SSD is available in configurations of 120, 240 and 480GB and comes with a standard three year warranty.  Specifications list performance at 550MB/s read and 520MB/s write with a maximum of 83,000 IOPS at low 4k random write aligned disk access.  All are TRIM capable and support S.M.A.R.T. features.

The exterior shell of the SanDisk Extreme is of black metal and, for anyone interested, there are four screws hidden under the rear specifications sticker that will allow access to the PCB once removed.  We might suggest that, much like the security labels we normally see on most SSDs, any damage to that specifications sticker might void your warranty should something happen to the drive.

The heart and soul of the Extreme is the LSI SandForce SF-2281 processor which can be found on the printed circuit board along with eight modules of SanDisk 24nm toggle mode NAND flash memory.

The total RAW capacity of the SSD is 256GB as each module is 32GB in size, however, firmware and over provisioning needs reduce the Extreme to the advertised capacity of 240GB.  Formatting reduces this further and leaves the consumer with an end capacity of 224GB.