We have in our hot little hands this morning the Samsung T3 2TB Portable SSD and it is pretty amazing to think that this product contains storage space that most could never come close to filling.  Mind you, if you had use for the storage of a half million songs, or a few million books, 170 million word documents, or even 1000 hours of movies, this would be the device for you.  Still, just consider how amazing this is that we can now keep so much right in the palm of our hand. 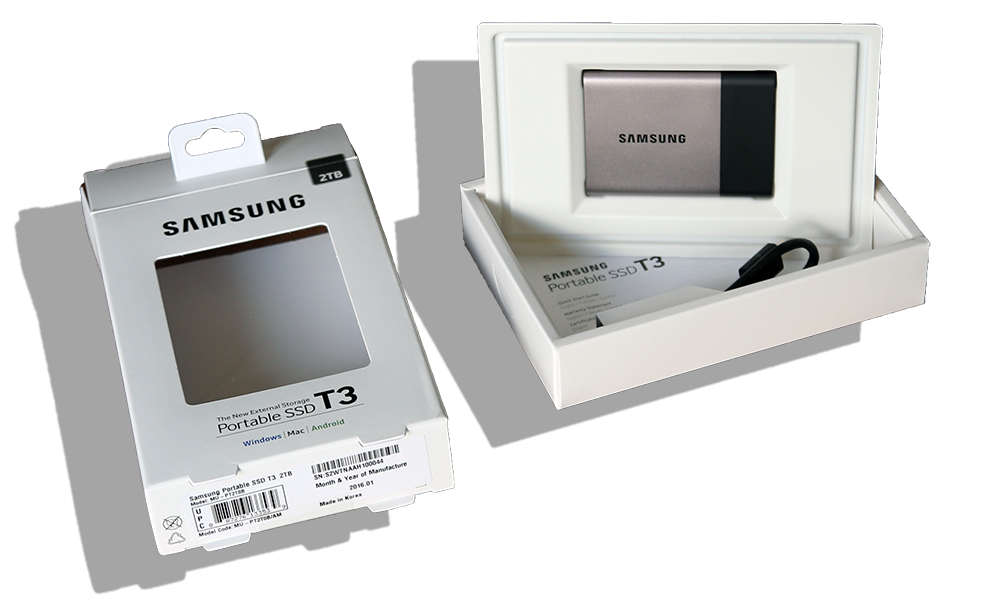 While it remains true that need for this much storage just isn’t necessary for the average user, the Samsung T3 is heaven for media professionals, along with those media junkies that like to have the history of the world at their fingertips.  Samsung has gone well beyond just capacity, however, and our in-depth look at the Samsung T3 2TB Portable SSD  will demonstrate that Samsung has listened very carefully to what the consumer had to say since release of the T1 1TB SSD.  They have made some very key upgrades to the T3 that make it very attractive.

The Samsung T3 is available in capacities of 250, 500, 1TB and 2TB, and performance is the same for all capacities, thanks to Samsung’s own Turbo Write Technology implementation.  Performance is also well above what we have seen before in portable SSDs and can reach 450MB/s read and write when USB 3.0 or USB 3.1 is combined with UASP (USB Attached SCSI Protocol), 350MB/s for USB 3.0 and around 49MB/s for USB 2.0.

Additional features of the T3 included AES 256-Bit encryption and the ability to activate their security software or not use it at all, a definite plus from the T1 where we found difficulties using it in some secure systems with its always-active security software.  The T3 is also compatible with PC, Mac and Android phones and comes formatted in exFAT for this, however cabling to attach the Samsung T3 to the phone is not included, only to a PC.  This SSD also comes with Samsung’s Dynamic Thermal Guard Protection which will slow the speed of the T3 significantly should it become too hot; this intended for the SSDs protection.

Different from the Samsung T1 SSD, the external case of the T3 is metal.  It weighs 51 grams (under 2oz) and can sustain up to up to 1500G of force.  Opening the SSD can be accomplished by removing two screws at each end, however, be aware this will immediately void your warranty and the screws strip VERY easily, making them very difficult to remove and replace.

Looking at this picture of our T3 disassembled, we can tell you that the two bottom rubber pieces go on the front and back of the SSD to allow for very effective heat dissipation to the external case.  Two screws are used on each side of the exterior case, with the three remaining screws securing the SSD and USB PCBs to the plastic retainer just above it.

A closer look shows us the same low power MGX controller, TLC V-NAND memory and DRAM cache as we saw in the T1. Once again, the heart of Samsung’s portable SSD is based on a MSATA SSD.