To give you an idea how far we have come in solid-state storage, the very first notebook sold with an SSD was the Dell XPS M1330.  It shipped with the Sandisk u5000  (my first and very embarrassing review) SATA2 32GB SSD, an SSD that would gain infamy as the first ‘stuttering SSD’ and, back then, storage capacity wasn’t an option. I purchased that ‘ultrabook’ back in 2007 and it still runs strong today, the original Windows Vista 2006 being the OS and that SSD still the storage medium within.

With the lack of storage of that 32GB SSD in mind, this report focuses on the 4TB version of the Samsung 860 Pro SATA3 SSD,  an SSD that has 125x more storage available to the user.  From where we started in 2007 with the Dell XPS, to our report today of the world’s largest available client SSD, this picture of the worlds first SSD laptop still running is rather special. 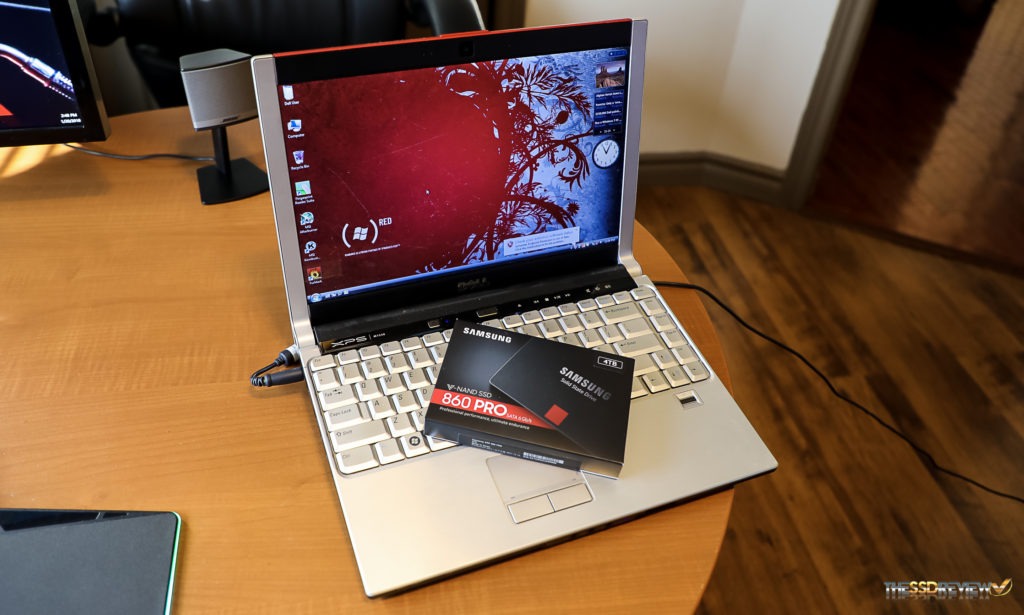 Even I, a ‘storage hoarder’, am not quite sure what the average consumer might have that equates to 4TB of necessary storage, but the Samsung 860 Pro might be an option as present-day media sees 4K become 8K and an 8K movie as large as 15-27TB uncompressed.  Still, if you wanted to store Microsoft Word documents, the Samsung 860 Pro 4TB SSD holds 240 million Word pages.  Or if you have a few pictures, this might hold about 8 million shots at an average of 500k each. MP3s you say? This SSD will store a million or so. Movies???  How does 2000 hours or 500 Blue Ray DVDs sound?

The Samsung 860 Pro 4TB SSD is designed for client use as well as NAS and workstation.  All capacities have a 5-year limited warranty, the 4TB version speaks of 4800TBW endurance with endurance ratings doubling for every capacity, and the 860 Pro now supports Linux. The manufacturers suggested retail pricing for the 4TB version of this SSD is $1899.99. Check out the Amazon price now!

The Samsung 860 Pro SSD is constructed of a two-piece black aluminum casing which is secured by three screws at the back.  Two of these screws are hidden underneath the back label, that of which is a security label and will rip at any attempts to access those screws, thus voiding your warranty.

The PCB is a half-sized version which contains the updates Samsung MJX controller, a 4GB LPDDR4 cache chip, and eight modules of Samsung’ latest 64-layer 2Bit MLC V-NAND memory, four on each side of the green PCB. Each memory chip accounts for 512GB of RAW space, however, the total formatted volume is approximately 3815GB. Would you believe Samsung could probably make this 8TB if they elected to move up to a full-size PCB and 16 memory chips?