Smallest and Fastest SSD To Date

This SSD Review is going to closely evaluate the renice X3 120GB SATA 3 mSATA SSD.  It will be a great comparison with our similar reviews of the Samsung PM800 and Intel 310 just a few months ago.

Because of their tiny form factor, mSATA SSDs are starting to appear as the only storage option in ultralight notebooks such as the Samsung Series 9 as well as being seen as boot drives in larger notebooks offered by Lenovo in their T, W an X Series, Asus and Dell.

mSATA stands for mini-SATA and is a relatively new format of SSD, measuring roughly 50mm long, 30mm wide and 4.75mm high.  That is about 1/3rd as long as a credit card and just as wide.  It also stands just a touch higher than a 25 cent piece. 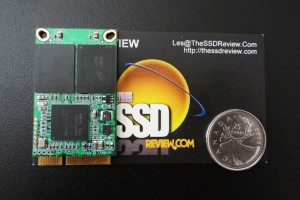 Personally, my favorite picture taken in explanation of mSATA dimensions was shown in our Intel review sheerly because of the character shown by its model.

The Renice X3 SSD is available in capacities of 25, 60 and 120GB and the price of the unit we are testing today is $309.99.  At 120GB, this SSD is the largest available consumer SSD available to the consumer as the Samsung PM800 (at 128GB) is only available through purchase of notebooks with the SSD already installed.  Renice lists the X3 performance specifications as 260MB/s read and 200MB/s write and may want to amend this for the benefit of sales as we tested it at 281MB/s read and 272MB/s write through the same methodology used by manufacturers to reach listed product specifications.

In fact, they also list IOPS at 30, 000 at 4k random write aligned disk access whereas we stretched that result up above 45000 as you will soon see.  It would probably be an accurate assumption that the performance increase is a result of some recent firmware update by SandForce.

The  SSDs components consist of the SandForce SF-1222 processor and 4 modules of Micron 34nm NAND flash memory (MT29F256G08CUABA).  Each memory chip has a staggering 32GB capacity which accounts for the higher price point for this 120GB SSD and the total RAW memory for the drive is 128GB.

Unlike all other SSDs we have reviewed thus far which have required an an entire memory chip for SandForces firmware and over provisioning needs, this SSD only uses one die of a memory chip, each chip containing 4 die of 8GB for 32GB total.  This accounts for the advertised capacity of 120GB, however, formatting brings it down to 112GB available user capacity.

Our Renice X3 mSATA SSD was accompanied by a Renice mSATA transposer which converts the mSATA interface into a SATA interface suitable for testing on a typical SATA system.  Having tested 3 mSATA SSDs now on both desktop and within ultralight laptops, we can attest to the fact that there is no performance difference either way.

Introduction to The X3 and Its Build

The SATA 2 SSD Hierarchy and Our Verdict