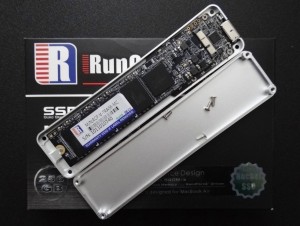 Up on TSSDR’s bench we have a pre-release sample of Runcore’s new Rocket Air SATA 3 SSD and it is designed specifically for Mid-2012 Macbooks and similar ultrabooks that might fit the same SSD form factor.

The introduction of such an SSD today is like a breath of fresh air for many MBA and ultrabook owners as ‘blade’ or ‘gumstick’ style SSDs just aren’t that available in the consumer market quite yet.

In fact, the only other retail blade we have reviewed was the OWC Mercury Aura Pro and it was released specifically for the 2012 MBA family. Let’s take a closer look at the Runcore Rocket Air but please keep in mind that, even though you might find it on the Runcore website, the final release might have a bit more fine tuning than what you see here.

On release, the Runcore Rocket Air will be available in both SATA 2 and SATA 3 configurations with the SATA 2 version available in 120 and 240GB capacities while the SATA 3 is available in typical binary capacities of 128 and 256GB.  Runcore is the only manufacturer to offer typical binary capacity SSDs while using the LSI SandForce Flash Storage Processor in a ‘blade’ or ‘gumstick’ form factor design which will be good news for the consumer as it means an additional 7% available storage space. Let’s not even try and guess what such an upgrade would be from Apple with an MBA as our previous investigation of trying to upgrade from a 256 to 512GB SSD was a mind boggling $1100 with Apples retention of the original SSD.

Performance of our sample Runcore Rocket Air is listed as 488MB/s read and 501MB/s write transfer speeds which is a bit unusual as we normally see LSI SandForce performance that is a bit faster at read transfers than write. Power consumption is listed at under 3W active and 1.65W idle and something that was very good to see was Runcore’s identification of the memory being Tier 1/Grade A Toggle Mode synchronous which hasn’t become commonplace in mSATA or similar form factor SSDs to date.  The Runcore Rocket Air warranty is three years and pricing is not available as of the time of this report.

For this report, we thought we might take a ‘first crack’ at a bit of a video unboxing and it can be seen below.  Understanding that this is only our first to which a great deal was learned during production, I would like to know whether our readers find such video’s worthwhile for future reviews.  Admittedly, it is a bit long and it might not appear so but there are no cuts in the video and it took no less than 50 prior tapings to get the final result.  I finally understand how frustrating the term ‘Cut!’ can be.

As a bit of an update since creation of this video, the Runcore Rocket Air was a very simple migration to the 2011 MacBook Air we used as our test platform, however, the SSD was both the wrong size and interface to work in the Asus Zenbook UX21E 11.6″ ultrabook we had on hand and we hadn’t any other Zenbooks or Thinkpads available to test with.  This was mentioned to Runcore who stated that they would ensure specifications were up to snuff on product release.

Taking a quick look at the bench, we can see that, along with the Runcore Rocket Air SSD, comes an aluminum exterior adapter and USB 3.o cable to assist with system migration.  For those thinking that migrating a Mac might be a bit difficult, it might appear so on the outset but software called Carbon Copy Cloner makes it a very simple process as we described in our OWC Mercury Aura Pro SSD review.  The only difference was there being absolutely no necessity for an external drive as the Rocket Air shipped with the external adapter.