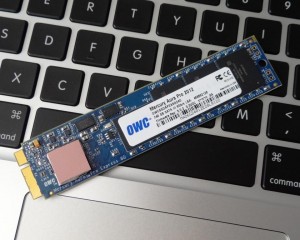 This SSD report will be a detailed analysis of the OWC Mercury Aura Pro Express 6G SSD, the first and only third party SSD compatible with the new 2012 MacBook Air.

This report will also carry things a step further by detailing our migration of the Aura Pro into our 2012 MBA, a system that we had successfully set up with Boot Camp as a dual Boot OS X Lion/Win 7 system.   To speak of how things went, we are writing this report up on our new ‘OWC Charged’ MBA.

A BIT MORE ABOUT APPLE

In the short time that I have been an Apple enthusiast, I have to admit that they are a bit of an odd duck and, although they portray an image of ‘customer first’, the reality of it is nothing could be further from the truth.  I was on the outside looking in and and am now on the inside looking out (seemingly behind bars) and must say that, as much as I have found a certain addiction to my Apple products, there have been times when I just wanted to introduce them to my 20 oz. straight claw rip hammer.

I have spoken freely about these things here and here but for now, I am going to start with the new Apple motto of ‘Not User Upgradable”.  Apple’s use of their proprietary pentalobe screws should be the first clue! The new MBA SSD, as it seems, is not only incompatible with other similar ‘blade’ style SSDs but also, the new 2012 MBA cannot even be upgraded with a 2011 MBA SSD if you wanted to do a simple switch on upgrade.  In fact, they went one step further and the new MacBook Pro SSD form factor is totally different yet and cannot be interchanged with anything that we are aware of.  Through all of this, Mac and I seem to have developed a great love/hate relationship though.

It was almost like OWC had the inside word of the new MBA SSD compatibility issue.  I ordered my MBA on release and, not two weeks after posting my initial review and experience, I have this OWC Mercury Aura Pro 240GB ‘LSI SandForce Driven’ SSD on my desk and am wondering how the heck I migrate a SSD in OSX.  Everything is proprietary remember?  I can’t even delete an uploaded picture from my iPAD with this company.

The Aura’s engine is none other than the  SF-2281 processor along with eight 32GB modules of Sandisk 24nm MLC NAND flash memory for a total RAW capacity of 256GB.

LSI SandForce over provisioning and firmware needs require 16GB which reduces the drive to it’s advertised capacity of 240GB and formatting leaves the end user with  224GB of available space typically.