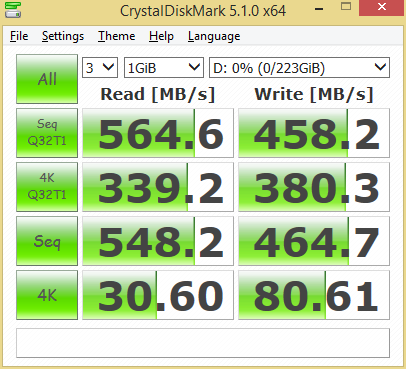 During our AS SSD benchmarks we can see that the 480GB model has a very slight lead over the 240GB model due to its faster sequential write speed. Overall, the 240GB model reached 1181 points while the 480GB model reached 1202 points! These results are very good! Both drives reach 527MB/s read and 240GB mode reaches 436MB/s write while the 480GB mode reaches just over 500MB/s. 4K QD1 performance is about 35-37MB/s read and 71MB/s write. Access times (latency results) are also very good. During the Copy benchmark, both drives delivered impressive results as well.

Finally, in Anvil we see that the performance is in line with what we have seen in the other tests. Overall, the CS2211s reached total scores in the nearly 4,900 point range which, again, is very good. Let’s continue on and see how these drives handle our more realistic PCMark test suites.