Perhaps the thing that astounded us the most, with respect to the OWC Mercury Aura Pro Express 6G 240GB SSD, was the fact that it’s performance of 91,273 IOPS was the highest we have ever achieved from a typical SSD.  A straightforward comparison against the stock Samsung Apple SM256E SSD shows that, although the Samsung may be faster when transferring incompressible data at high sequential levels, the OWC Aura Pro walked away with every other performance comparison thrown at it. Even comparing the Aura Pro to the Toshiba Apple TS128E SSD which is also ‘LSI SandForce Driven’, the Aura Pro had no problem showing its colors as the best performing SSD on the market for the 2012 MBA. 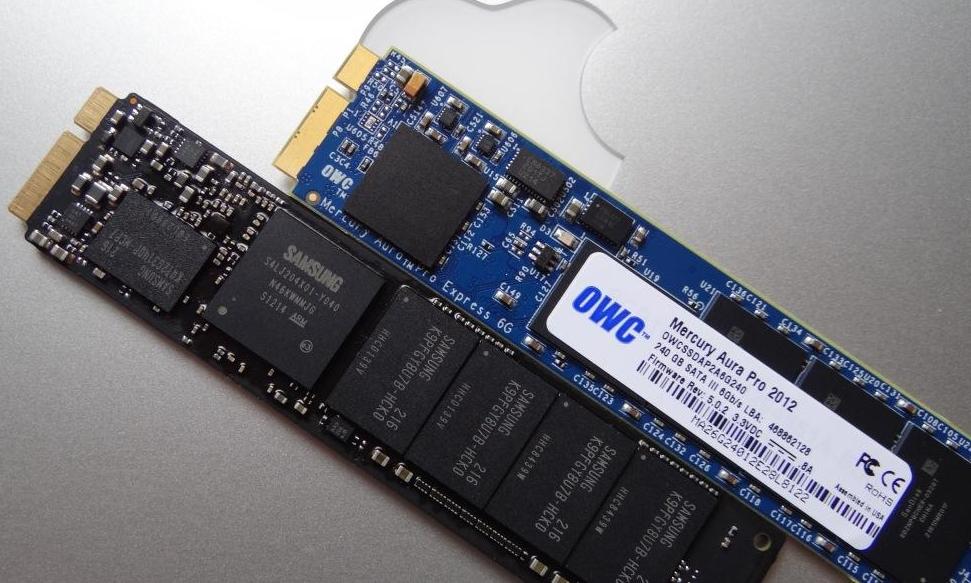 To get this answer, we spent over an hour on the phone with Apple directly and followed by two authorized Mac dealers and boy were we in for a shock!.  First off, the ONLY way to acquire a SSD upgrade is through the authorized dealer and ONLY if they conduct the migration.  This means you are paying, not only for the SSD and their switching the SSDs over, but also the complete OS migration that needs to take place and will take considerably more time.  To add to that, we could only find the price of the upgrade by supplying our system serial number and the price to move up to a 512GB SSD from a 256GB, as authorized by Apple, is $1100 for the SSD alone and not including the labor.  As if this wasn’t bad enough, your original SSD is retained and sent back to Apple!

To think that the 512GB upgrade alone will total roughly the same as a new 256GB MBA system purchase ($1529.99) once hardware cost, labor and taxes are factored in is unbelievable.  Apple shake your stem!

Last but not least, there are some companies that go a step further and OWC is one of them.  They are the only that we know of to have a 21 day ‘no questions asked’ return policy and that means that you get 100% of your money back if not completely satisfied.  This stands above the Aura’s standard three year warranty. Add to that the fact that each Aura Pro SSD includes pentalobe and torx screwdrivers that are necessary for hardware replacement and that they are available to assist in your MBA SSD migration and it is a win win all around.

Performance, price, warranty, no questions asked return policy and unbeatable customer service are something we see very seldom and definitely a business practice other SSD manufacturers should consider.  The OWC Mercury Aura Pro Express 6G SSD has earned our Editor’s Choice Award for so much more than being the best MBA SSD available.