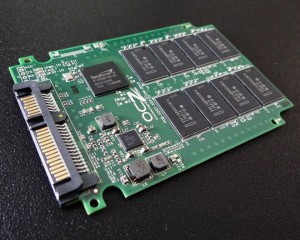 Realignment of priorities with respect to solid state storage at OCZ came as no surprise considering the turbulence of the past two years resulting in Ralph Schmidt’s appointment as the new CEO and the abrupt exit of Ryan Petersen from this part of the world.

The unchallenged leader of SSD models is now reducing it’s consumer line to just four models and, just as unexpectedly, the ‘LSI SandForce Driven’ Vertex 3.20 gets a refresh and remains in that mix.

Understanding that the OCZ Vertex 3 SSD is probably one of the most popular SSDs of the past few years, OCZ’s retention of this drive might not be such a shock to most but, competitiveness aside, OCZ now had the opportunity to ‘cleanse’ their product line with in house design.

The OCZ Vertex 3.20 SATA 3 SSD is a refresh of the Vertex 3 as OCZ has moved to Intel’s 20nm MLC NAND flash memory from the previous size of 25nm.  The Vertex 3.20 is available in capacities of 120 and 240GB, with a 480GB size expected in the near future.  Looking at the OCZ website, they have the V3.20 placed right beside the presumably ‘EOL’ Agility 3 in the ‘Mainstream Performance’ Section, with the former Vertex 3 still listed in the ‘High Performance’ area.  With listed specs of 550MB/s read and 520MB/s write with up to 90,000 IOPS at low 4k aligned random disk access for the V3.20, we don’t think we will be seeing that large of a performance gap between old and new.

The Vertex 3.20 is available presently and can be found at Amazon

The OCZ Vertex 3.20 SSD is a SATA 3 SSD and contains the LSI SandForce SF-2281 flash storage processor (FSP) along with 16 modules of Intel 20nm synchronous NAND flash memory, eight on each side of the printed circuit board.

Each module is 16GB in size for a total of 256GB RAW capacity, however, the LSI SandForce processor merits proprietary use of a 16GB module for both firmware and over provisioning needs, leaving us with the 240GB advertised capacity.  Once formatted, the end user has 224GB of storage available for their use.