Take a look at the three SSDs below.  They are as fine of an example as you can get to demonstrate just how far we have come in flash technology.  On the left is the Intel 910 Data Center SSD.  Paul Alcorn posted his review  of this SSD way back in 2012.  It had top speeds of 2GB/s, IOPS up to 180K and way back then it was priced around $4000.  Oh… It wasn’t capable of booting your system.  Next up we have the Kingston DCP1000 Data Center SSD on the right that Sean Webster reviewed not so far back in 2017.  It would get you 7GB/s, 1 mil IOPS, cost thousands, but also also couldn’t boot your. Both of these SSDs were well above reach for even the most demanding of PC enthusiasts, as they should be considering they are data center SSDs. They shouldn’t compare… 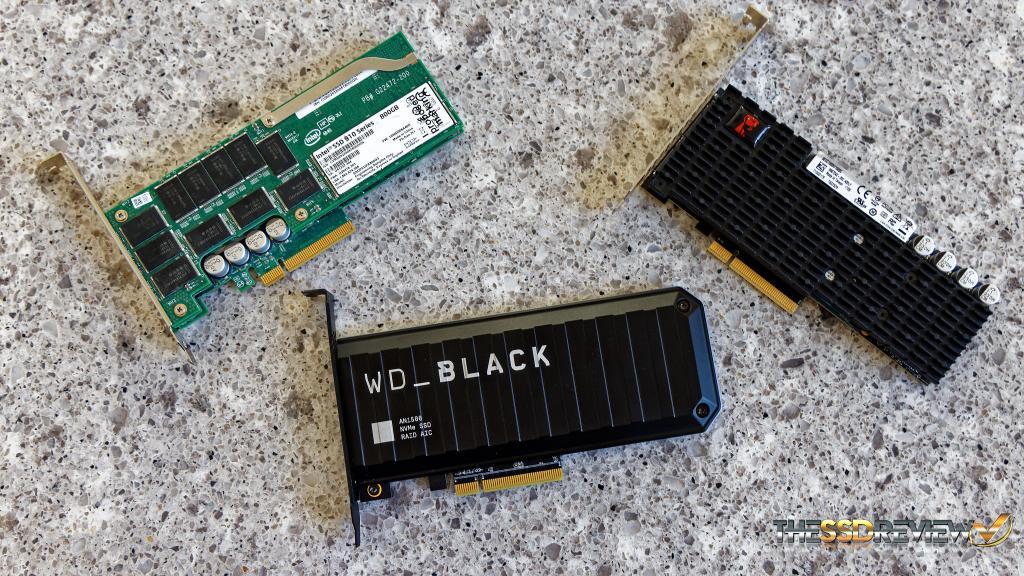 Last but not least, we have the WD Black AN1500 NVMe 2TB SSD at center which, like the other two, is built on a RAID configuration and also has an enterprise RAID controller that makes it rather special.  Much different than the other two SSDs is that the AN1500 is a simple plug-and-play SSD that can run as your boot drive in your present PCIe 3.0 system, providing PCIe 4.0 SSD speeds.  It has a 5-year warranty, speeds up to 6.5GB/s, read and write IOPS above 800K, and the 2TB capacity we are reviewing today comes in around $549.99.

Most everyone we talk to says this SSD has a hefty price tag but we don’t think so.  By the end of this report we are confident you will see that, at least for the media professional where speed means efficiency, the WD Black AN1500 is an SSD that they simply can’t live without.  It is also the cheapest available for this kind of lightning fast performance, when that upgrade of your present PC system would be necessary for Gen 4.

The Western Digital Black AN1500 is a HHHL (Half height half length) AIC (Add-In card) NVMe 1.3 SSD that contains two M.2 SSDs set into a PCIe 3.0 x8 RAID platform.  The fact that this is a x8 (8-lane) SSD may be one of its only downfalls, but if you want that much power without building an entire new system yet again, that’s the way it is.  The SN1500 is bootable, capable of TRIM, and comes with a 5-year warranty.

When we disassemble the AN1500. we can see that there are two solid aluminum covers that assist in cooling the AN1500.  Once assembled heat is pushed away from the SSD via thermal tape and spreads across the external casing where it dissipates.  Inside, we have the Marvel 88NR2241 Intelligent NVMe Switch which is actually an enterprise level RAID controller intended for server use.

The only thing we want to mention about TLC memory is that it uses a SLC cache which is absolutely great for finding that performance reflective of former gen SSDs but, once that buffer fills, you may find performance to drop significantly as it clears.  This is only typical of extremely large media transfers.

Lastly, we wanted to mention that WD also makes available their WD Dashboard and Acronis True Image free of charge to its customers.  The SSD Dashboard is just about the most complete we have seen yet with a Performance Monitor that is truly old school, the ability to TRIM  your An1500 manually or automatically, firmware updates and it also contains a Secure Erase selection which we can just about guarantee cannot be done as this is a RAID configuration.

Something we have yet to mention is that this is a RGB SSD with full control within the WD Dashboard.  Not only are there several combinations that you can try on your own, but also, this SSD is compatible with several 3rd party RGB software applications.