Whats probably the most amusing, and most unusual characteristic in our review of our second PCIe 4.0 SSD today is the fact that the only way you are going to be running these kind of SSD speeds anytime soon is with an AMD system.  It’s not often that we ever catch Intel with its pants down but, at least in this case, AMD is ahead of the game when it comes to the latest and greatest in SSD performance….and they are reaping the benefits.  The trade-off of course is that AMD write data transfer speeds have  traditionally been a bit less than Intel and you have to invest in a new AMD system, but when we are speaking of 5GB/s performance… that traditional performance concern is pretty much moot.  Our test subject for today… The Seagate FireCuda 520 1TB PCIe 4.0 NVMe SSD. 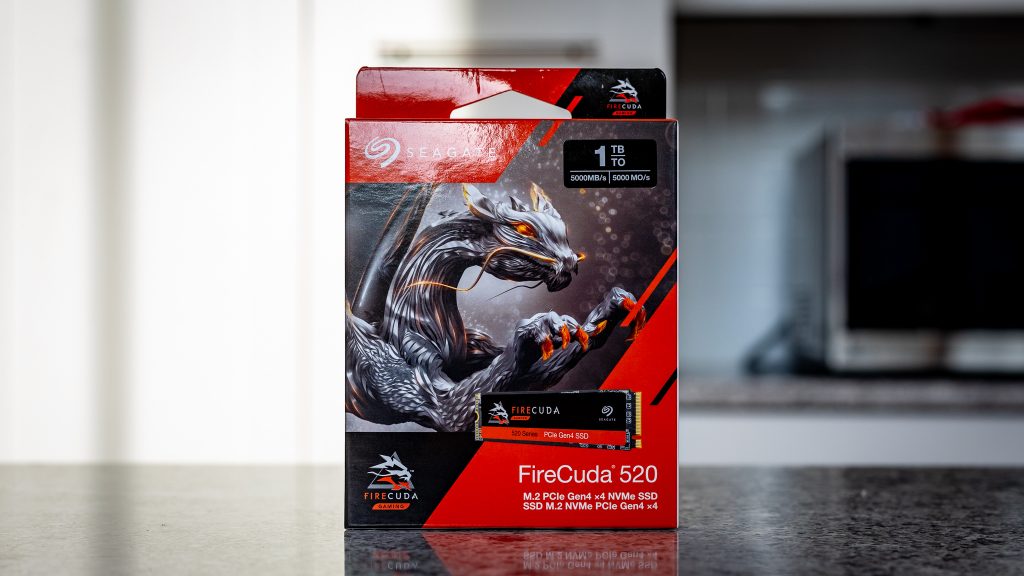 Performance differentiates depending on the capacity chosen and the 1 and 2TB versions have the highest data transfer speeds with 5GB/s read and 4.4GB/s write with 760K IOPS read and 700K IOPS write.  Dropping slightly, the 500GB version still has 5GB/s read with 2.5GB/s write and IOPS also dips just a bit at 430K read and 630K write IOPS.  This SSD comes with a limited 5-year warranty with an added factor of 1800 TBW (Terabytes Written) per 1TB of capacity.

As mentioned earlier, this will be our second Gen 4×4 SSD review and it is very worthy to mention that, at least at this time, they have their Phison PS5016-E16 NVMe SSD controller in common.  In fact, this controller is the only Gen 4×4 SSD controller available to manufacturers so we may just find that performance is very similar with our last report of the Corsair MP600 1TB SSD.

Don’t give up on us just yet though.  If you look close, Seagate has their own branding on the Phison E16 controller and we can clearly identify Toshiba BiCS 4 3D TLC 96-Layer NAND flash memory.  We believe this branding is in part due to the fact that this is not simply a generic rebranded SSD and Seagate has customized the E16 controller with their own custom firmware.

Looking closely at the components on our 1TB sample Seagate FireCuda 520, we can see two NAND memory chips on each side which would each have a RAW value of 256GB, as well as two Nanya 512MB DDR4 chips providing a 1GB buffer to the SSD.  Once formatted, there is 932GB of storage space available to the user.  Another important characteristic of the newer Gen 4×4 SSDs is that they run very hot, due to the incredibly fast data transfer speeds.  They have to have some method of heat dissipation, much as we saw with the inclusion of a heatsink with the Corsair MP600.  The Firecuda 520 does not include such and this may become the norm as we see PCIe Gen 4×4 motherboards include these heatsinks built into their design.