In our hands today is one of the few PCIe 4.0 NVMe M.2 SSDs available in the consumer flash industry. Surprisingly, its brand name is that of a relatively new company (at least when it comes to flash);  Sabrent.  PCIe 4.0 is the latest and greatest bringing data transfer speeds 5GB/s, and as media professionals know, these speeds  are everything in business productivity.  Very unusual in fact, is that we might see a new competitor marketing the latest and fastest in SSDs,  as well as testing the waters to be the first with higher storage capacities of four and eight terabyte. Most might be somewhat cautious to feel out the waters first, ensuring that their jump is a safe one.  Not Sabrent.  Their jump has already raised the bar in a take no prisoners industry that has seen so many companies fold historically. 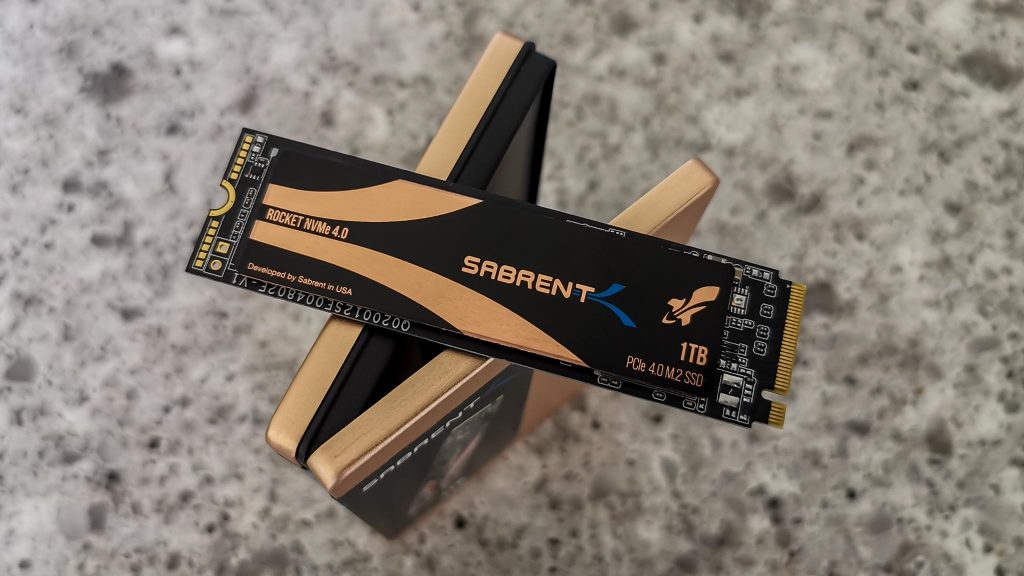 The Sabrent Rocket NVMe 4.0 M.2 1TB SSD is only the third PCIe 4.0 SSD we have had in our latest ASRock X570 AMD Test Bench to date. Before we jump into this SSD, let’s do something that we really don’t do much of these days. Let’s speak to this products packaging.  The Sabrent Rocket NVMe 4.0 M.2 SSD is set into a very attractive 4″ x 2 3/4″ x 1/2″ black package which might not seem that unusual, but it really is.  It is very small.

Considering a M.2 SSD is just over 3″ long, just under 1″ wide and weighs less than 10 grams, we have always wondered why companies send M.2 SSDs the size of a stick of gum in such large exterior packages.  The Sabrent Rocket  is of a very attractive gold and black color pattern that just speaks to its class and performance.  PCIe 4.0 SSDs are the cream of the crop and one gets that feeling as soon as they open this Sabrent gold aluminum case.

The Sabrent Rocket is a PCIe 4.0 x4 (four lane) SSD which uses NVMe 1.3 protocol and is a M.2 SSD of the 2280 form factor, which means it is 80mm long.  Sabrent is selling this SSD in 500GB, 1TB and 2TB versions (right now) and performance is variable, depending if you choose the 500GB or 1TB/2TB versions.  While the 1TB/2TB versions are capable of speeds of 5GB/s read and 4.4GB/s write, the 500GB version drops its write speeds down to 2.5GB/s write.  Sabrent has a great feature page on their website with full specs which can be found here.

Sabrent also speaks to 750K read and write IOPS, but that would be if we were testing on a PCIe 3.0 Intel based Test Bench and not our X570. The X570 drops IOPS just a bit, but it is the proper PCIe 4.0 platform, and one in which we haven’t seen from Intel just yet.  I never would have believed it but AMD has the market cornered in PCIe 4.0, and has for some time now.  As well, Sabrent also has you covered with a matching gold and black heatsink that adds just a bit to pricing, if you haven’t a motherboard that has an integrated heatsink to account for additional PCIe 4.0 temps.

Looking a bit closer at the Sabrent Rocket NVMe 4.0 M.2 SSD, we see that it contains the Phison E16 NVMe controller along with 4 pieces of Kioxia BiCS4 96-layer TLC NAND flash memory, two pieces on each side of the SSD.  The branding label that we saw above is actually made of copper for increased heat dissipation so don’t be removing it. It cannot be replaced in the same fashion and would void your warranty.

The PCB is black and there are two pieces of NANYA DDR4 DRAM cache on either side. Warranty for the Sabrent Rocket is a bit interesting and Sabrent has followed a path we very rarely see in this industry.  The standard warranty is one year, however if you register the SSD, it jumps to five years.

Also available at this link for download is The Rocket Control Panel.  Although this doesn’t have a way to measure SSD speed as others do, it has some very interesting inclusions that we haven’t seen elsewhere such as Windows Management and easy to read SMART details. SSD information is very straight forward, and also, a free copy of Sabrent’s tailored version of Acronis cloning software is available right in the Control Panel.

There are only three premium PCIe 4.0 SSDs available for sale at the time of this report and they all contain the Phison E16 controller; the Corsair MP600, Seagate Firecuda 520 and this Sabrent Rocket.  They are all virtually identical in performance and warranty, which makes pricing key.  The Sabrent Rocket NVMe 4.0 M.2 SSD is priced at Amazon right now at $119.99 for the 500GB, $199.99 for the 1TB and $319.99 for the 2TB version.  Comparing this SSDs pricing to that of the Corsair and Seagate was rather surprising as, not only was it cheaper in all capacities but also, its Amazon reviews are amongst the strongest we had ever seen with 1370 reviews of 4.8/5.  That is just flat out impressive.