One of the oldest names in SSDs is Kingston.  One might not expect such as Kingston, by all sense of the term, is a third party manufacturer…or distributor.  Unlike Samsung, WD/SanDisk, Intel, Kioxia, Micron, SKHynix and a few others, they do not actually own a fab that ‘grows’ the silicon ingots to manufacture NAND wafers.  Unbelievably, the original Kingston SSDNow release was a rebranded Intel X-25m and, in doing a Google search just now, I could find availability of that SSD still on Amazon.  Was Amazon even a thing when this was released?  Nope.  Not unless you were going there. 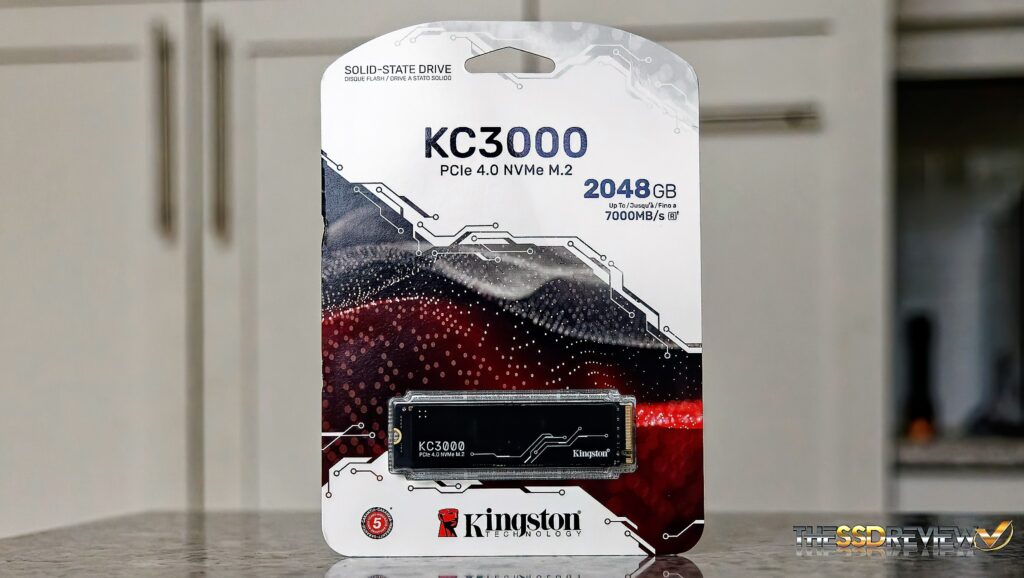 And Kingston has a bit of a storied history as well.  In fact, one of our most popular ever articles posted years back had Kingston front and center and it was memorable.  The interesting thing is though; Kingston has a massive following and does great business in technology.  In our own articles, it is most obvious as our traffic jumps exponentially with every Kingston post we publish.  Let’s see if we can do it today in our review of the newest Kingston KC3000 Gen 4 NVMe SSD.

The Kingston KC3000 is a PCIe 4.0 x4 (4 lane) M.2 2280 (80mm) form factor SSD that uses the latest NVMe 1.4 protocol.  It will be available in capacities of 512GB, 1TB, 2TB and 4TB and specifications list read and write performance of up to 7GB/s with up to 1 million read and write IOPS.  To assist with cooling, the black branding you see in this photo is actually a very thin low profile graphene aluminum heat spreader.  This may suffice in some applications such as a PS5 installation, but it doesn’t in our testing and we found it necessary to add an additional heat sink just to make sure we were getting top performance.

The KC3000 is a two-sided SSD and the components on the bottom are hidden by a white branding sticker that describes the SSD.  I don’t know why but I like the fact that the capacity is right there in large lettering.  Maybe I am getting old but I can recall fighting to find the barely visible capacity in some SSDs.

The components of this SSD are a very familiar combination and make up one of the most powerful SSDs on the market today.  They are similar to that of the Corsair MP600 Pro (reviewed here), the Seagate FireCuda (reviewed here), and our original Phison E18 B47R Fortis Evaluation Sample SSD (reviewed here), but for the fact that Kingston likes to brand their components with their own information.  We will clarify right off though that different manufacturers choose different firmware variations and, as this SSD combination matures, we see new things that differ from the previous.

The Kingston KC3000 is built on Phison’s ever popular PS5018-E18 Gen 4 NVMe SSD 8-channel controller, eight packages of Micron’s best 3D TLC B47R and two packages of presumably DDR4 DRAM cache buffer.  The Phison E18 is a 3x Arm Cortex R5 NVMe controller with 2x Phison proprietary IP CoXProcessors for a total of 5 cores. It has an 8-channel design with 32CE, relies on NVMe 1.4 protocol, utilizes the TSMC 12nm manufacturing process, has a 4th Gen LDPC engine and is PCIe 4.0 4-lane running at up to 1,600MT/s.