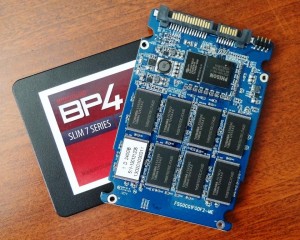 A week or so ago, we published a review of the MyDigital BP4 that was ‘ a wolf in sheeps clothing’ in a way as it was a 120GB SSD with an exterior label claiming to be 240GB.

After posting the review, MyDigitalSSD called and insisted on sending the REAL 240GB BP4, claiming that it’s performance would be something to write about. Given our workload, one review of a specific model would normally be enough UNLESS we observe a difference worth letting you know about.

Higher capacity, same model, and a second report… Does that say anything to you?

The exterior casing of the BP4 is of a flat black aluminum two piece construction and there are four screws on the bottom that hold the shell together.  Inside, we have a printed circuit board(PCB) which contains a Phison PS3108-S8 four channel controller that operates at a maximum frequency of 300MHz with 40MHz external crystal.  In plain English, the consumer should realize longer battery life on a portable system through this design.

Also found on either side of the PCB are eight modules of Toshiba 19nm Toggle Mode NAND flash memory with a product number of  TH58TEG7DCJTA20, as well as a Powerchip Semiconductor 256MB DRAM cache right beside the Phison controller.

Of particular interest is Toshiba’s new Toggle Mode 2 NAND flash memory which really boosts sequential read performance significantly.  More important than the overall performance, however, this memory reaches faster speeds at smaller file disk access which could result in a visible performance boost as we will demonstrate in our ATTO testing.