A year ago Intel launched their first line up of NVMe SSDs. The DC P3700, DC P3600, and earlier this year they officially launched the DC P3500. As you might be lead to believe, the DC P3700 was their top tier product, which we were able to review, not only in the view of enterprise performance, but also from a storage enthusiast’s perspective. The Intel DC P3700’s performance at the time was very impressive and still is today, delivering up to 2.8GB/s read and 1.9GB/s write as well as being able to withstand 460K/180K IOPS. At $3/GB delivering such high performance and now, up to 17 DWPD endurance for data center use, it was a recipe for success from the start. The DC P3500, the runt of the litter, is meant for read-centric workloads with much lower random write performance and a 0.35 DWPD endurance rating. The DC P3600 on the other hand is in the middle of the trio, meant for more mixed workloads with great read and write performance, but a 3 DWPD endurance rating. 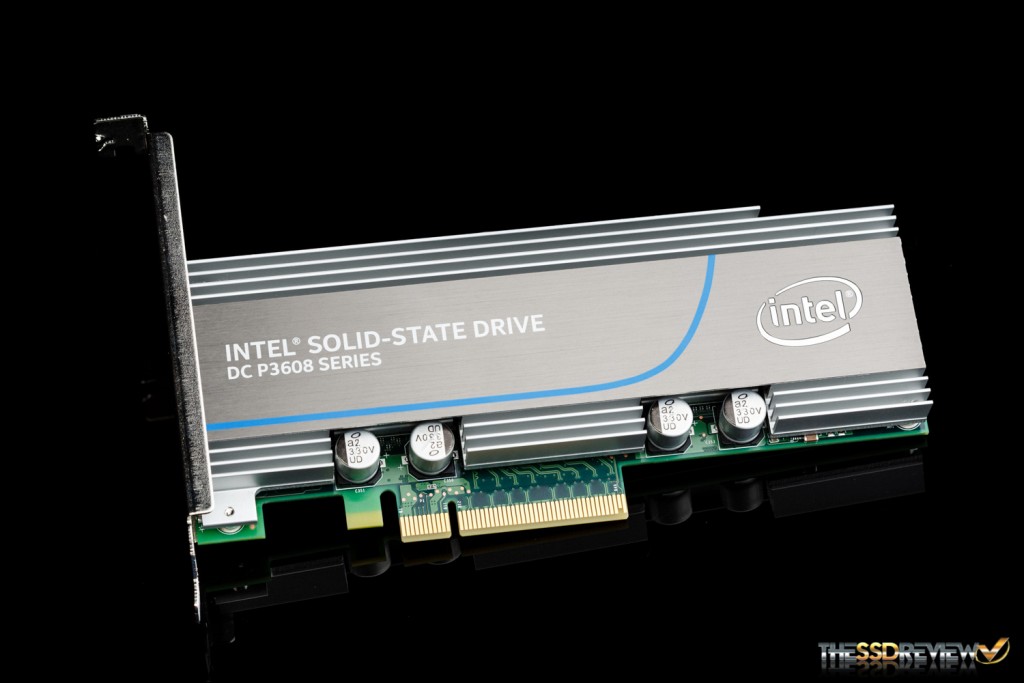 Now, however, enterprise demands are evolving. We are seeing the need for higher capacity and even higher performance storage solutions. With NVMe now coming from all corners and 3D NAND from companies other than Samsung on the horizon, Intel has decided to breathe new life into their DC P3600 series before the new year and they did so with a pretty big breath. They continued down the road with NVMe of course, only this time they did so while utilizing a dual NVMe controller design and kept a similar $/GB value as the original DC P3600. The result is something rather impressive, the new DC P3608! This SSD has been designed to meet the demands of high performance computing (HPC), database, and big data analytics use cases. With incredible speeds of up to 5GB/s read and 3GB/s write, the ability to deliver up to 850K/150K IOPS read/write, and capacities up to 4TB, this NVMe PCIe SSD is definitively a beast. Now, let’s get on with the review shall we?

Also, in line with the original DC P3600, the DC P3608 provides for 3 DWPD, based on the JESD219 workload, for the course of its 5-year warranty. To get such high endurance figures it utilizes a Low Density Parity Check (LDPC) engine for error correction and also has XOR of NAND which provides for RAID like protection from block, page, or even total die failure.

There is OS support for:

The Intel DC P3608 utilizes both 5V and 12V power and has three active power modes. Default allows for up to 40W draw, but if that is too high for power sensitive systems it can also be set to 35W or 25W. Idle consumption is rated for 11.5W.

The drive’s operating temperature range is 0-55C and supports temperature monitoring via in-band through NVMe SMART and out of band, which enables OS agnostic monitoring through the NVMe management interface specification. Thermal throttling will occur when approaching maximum operating temperature. To ensure that doesn’t happen, you will need to make sure that this drive gets at least 400LFM of airflow.

With the heat sink and back plate removed we can get a better understanding of how this drive is designed. While the dual NVMe controllers alone are a sight to see, what we found to be more interesting is the PLX PEX8718 switch chip between them. It is what allows for the controllers to work together over a PCIe x8 link. Also, we can see that each controller has a pair of capacitors, used for power-loss protection.

Intel is utilizing what seems to be an updated version number of their 18-channel NVMe controller in the Intel DC P3700 because it’s part number varies just slightly. It is CH29AE41AB1, while the Intel DC P3700 is part number CH29AE41AB0. Intel states that it is the same controller as their other NVMe SSDs. Each of the dual NVMe controllers are responsible for half the NAND and present two 800GB volumes to the OS. By utilizing RSTe 4.3 we will be able to stripe the volumes together to get a single RAID 0 volume capable of maximum performance.

We asked Intel what the RAW NAND amount and layout was, but they are not releasing the information at this time. What we do know is that the DC P3608 utilizes 128Gbit 20nm HET MLC NAND and there are 18 packages in total. So, with that we can speculate a possible RAW NAND capacity and over provisioning. We believe that each chip could have up to 8 die in each for a total package capacity of 128GiB. Times that by 18 and we get a possible total RAW amount up to 2304GiB. This equates up to a possible 44% OP. While this seems high, given the following information, this possibility seems to be believable. The DRAM cache is comprised of what seems to be ten Micron DDR3-1600 chips, part number MT41K1G4RH-125:E. These are 4Gb chips, thus they total to 5GB in capacity for a 2:1 DRAM MB:GiB NAND ratio.