Intel Optane Memory is Intel’ first phase in release of their Optane flash technology line that Intel hopes might revolutionize the flash industry.  At its most basic level, it is SSD storage that caches your hard drive with performance speeds up to 1.4GB/s, a speed that has yet to be seen for this type of storage in the industry.  The term ‘Optane’ is the new branding designation for flash products using Intel’ newest 3D XPoint flash memory. 3D XPoint just may be game changing, and in fact, it could almost be argued that Intel/Micron may have just invented a better wheel when the entire 3D Xpoint story is told.

3D XPoint, development of which is shared between both Intel and Micron,  changes the way data is stored on flash memory, increasing data transfer speed and endurance significantly.  We will elaborate on that within this report.  Most importantly though, we hope this review provides a very easily understood study of what this will mean to you in the future, as Optane is sure leave its mark on flash technology as we see it.

Intel Optane Memory, as released this morning (24 Apr 17), is available in 16 and 32GB capacities and is an SSD (termed ‘Module’ by Intel), capable of caching your hard drive through its included software program, increasing PC speeds significantly. Intel’ claims are simply that a computer equipped with the Optane Memory module will increase general performance 21 times that of a hard drive alone.  More specifically,  their testing has displayed performance increases of 5x when launching of Google Chrome  and other web browsers, quicker PC start times, 67% faster game launching and loading of next level game activity, launching Microsoft Outlook and e-mail clients 5.8 times faster and 4x faster search results.

When push comes to shove, Intel wants to tackle the world of hard drives with the Optane Memory module by making it standard in oem machines, and also available for the consumer to conduct the upgrade themselves.  79% of desktop PC’s today still contain hard drives, the remainder enjoying the speed and silence of SSD (or SSHD).  When you consider the low price of Intel Optane Memory, which is $44 for the 16GB capacity and $77 for the 32GB capacity, you can bet Intel Optane Memory will become a common feature found in new oem PC systems, those same systems already containing the latest Intel 200 series CPU. The Optane Memory module is available as of the release of this report and has a 5 year warranty. Check for availability now at Amazon. 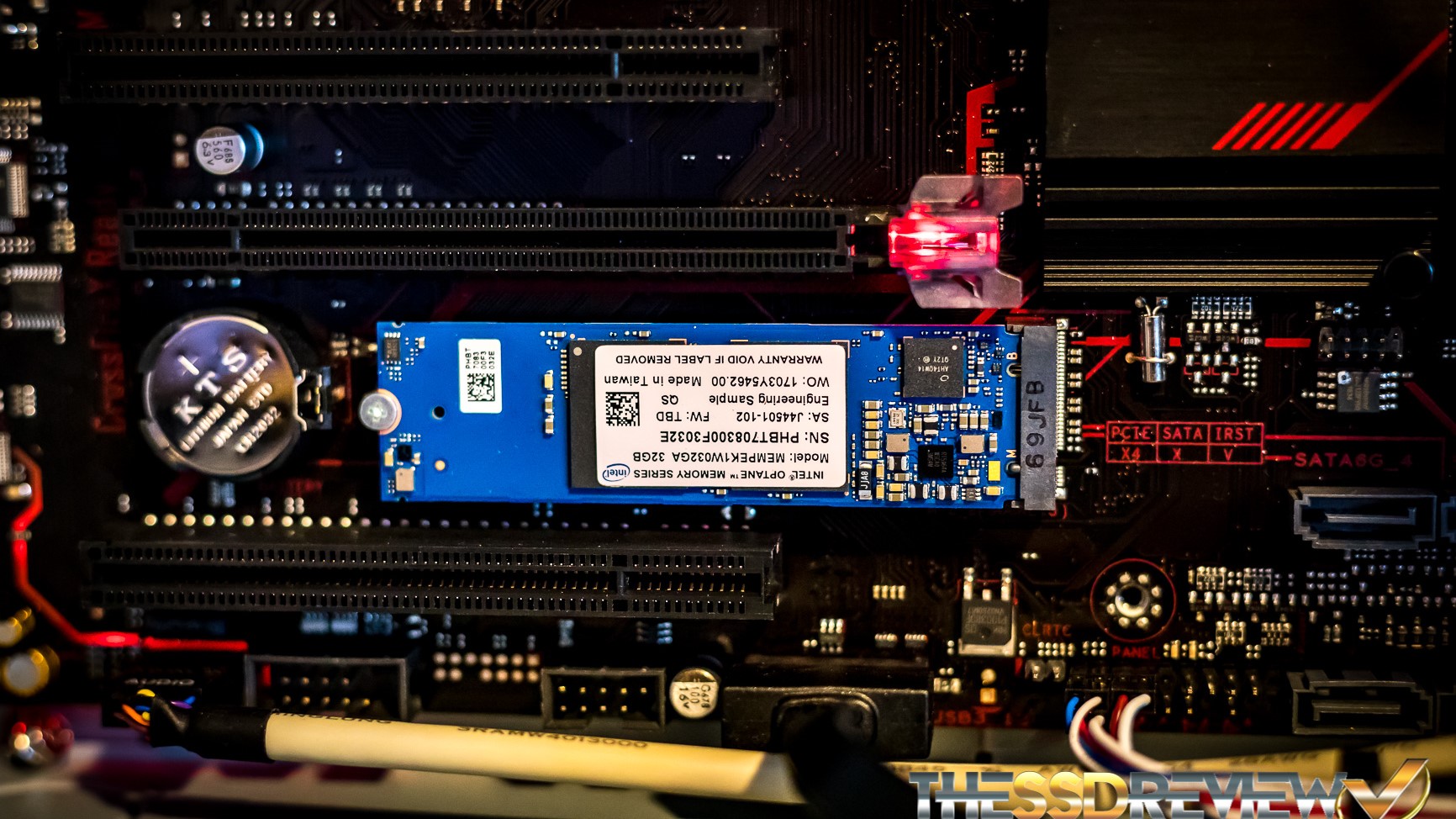 The Intel Optane Memory module is a 2280 M.2 SSD (80mm long) with a PCIe 3.0 x2 NVMe interface.  It contains two 128gb (16GB) 20nm Intel XPoint dies connected to a very small ASIC controller on a blue PCB.  The connector has two notches, known as the ‘M’ and ‘B’ keys, this type of SSD traditionally being seen as two lane PCIe 2.0 and capable of speeds up to about 800MB/s. Utilizing a two lane PCIe 3.0 solution, as we see here, 2GB/s data transfer speeds can theoretically be reached.

If you look at the first Crystal DiskMark result we posted above, you will notice the high read speed of 1417MB/s which is the first time we have seen such performance out of this specific ‘B’ and ‘M’ type M.2 connector.

Tests have recently been published on Intel’s newest Optane DC P4800X enterprise SSD.  I am going to recommend reports by my friends Paul Alcorn and Allyn Malventano . These reports do an amazing job of explaining how data no longer needs to be stored in the traditional method of blocks and pages causing write amplification, and how it is no longer a necessity in the SSDs operation to erase date before writing new data in that same space. This, and the necessary routine of ‘garbage collection’, have always been the ‘Achilles Heal’ of flash memory.  Most importantly though, both of these reports demonstrate first hand how steady state performance is a thing of the past.  New Intel SSDs have the same performance when they are first installed as when they have been in use under pressure for a period of time.

HOW DOES A DISK CACHE WORK?

During our testing, we visually observed speed gains in system start-up, shut down, application loading, web browser and e-mail opening and use, as well as just about any other activity we commonly do on the PC.  How the Optane Memory module works is relatively simple. It stores a cache of the files associated with what you do most on the Optane Memory module, calling them up much quicker than having to go to the hard drive for them each and every time. Consider renovating a home.  Work can be accomplished faster by putting the most common tools in a room close to you, rather than in the basement or out in the vehicle. It is the same concept; the room is the cache that helps speed things up.