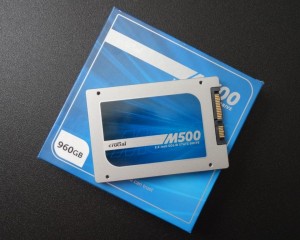 By the time this report of the new Crucial M500 960GB 6Gbps SSD is published, Crucial will have succeeded in the most significant SSD release of 2013.

Not only is a 1TB SSD finally available to the consumer, but also, Crucial guarantees M500 success with a price point that could create ‘price panic’ in retail SSD sales. They have gone further though. Without a premium, Crucial has included key enterprise features in the M500 that make the M500 hard to match.

Would we be a bit forthright in stating that perhaps the only companies capable of sustaining 1 TB mass SSD sales are those that manufacture flash? These are limited to Intel, Crucial/Micron, IMFT which is a joint venture between the two, Samsung, SanDisk and Toshiba. There is also SK Hynix and maybe even one or two other lesser known memory manufacturers but, let’s be honest, the North American market buys from those they know and trust. Even examining the players at the table now, it is not a far stretch to believe that we just might see Samsung and Crucial going head to head at days end.

Both provide their own memory, internal cache and although Samsung may appear a step ahead with their own controller, Crucial/Micron and Marvell are so close they just may be joined at the hip. Don’t get me wrong; third party manufacturers just may follow suit with a SATA 3 1TB SSD to stay in the race. That is where things get a bit sticky though. Crucial/Micron has added a few features to the M500 that even Samsung hasn’t brought to the 840 Pro. In fact, we had asked Samsung if they planned to release a 1TB capacity of their 840 Series SSD at the Samsung 2012 SSD Summit in Seoul, South Korea. Their response was that they didn’t believe it financially feasible for the consumer market just yet. Will this change things?

The Crucial M500 is a SATA 3 SSD (as all are these days) with full backwards compatibility to SATA 2. It is available in capacities of 120, 240. 480 and 960GB and is the first mass produced 1TB SATA 3 SSD available to the consumer. Along with the 2.5″ notebook form factor, Crucial will also be following suit with mSATA and the new M.2 NGFF (New Generation Form Factor) SSDs up to 480GB as well. Performance is variable and dependent on capacity as detailed in this chart:

worldwide has availability at these prices right now. This puts the 960GB version at .62/GB and the 480GB at .83/GB, both now being the lowest price point by which ANY SSD of these capacities has been released to date…and by a long shot.

Crucial initially stated that the M500 960GB SSD would be priced under $600 and they have stood by their word. Unfortunately, the middleman and e-tailers need to get their piece of the pie, which typically inflates pricing initially, and we hope our included price links can save our readers any additional cost. We are certain of one thing, however, and that is that pricing their 480GB capacity under what many still have for their 240GB premium SSDs is going to ruffle some feathers and cause some purchase shifting.

Crucial provided Technology X with a M500 480GB SSD to review and their report can be found here.