A few months back we posted a review on the latest and greatest Phison PS5012-E12 NVMe controller and our first look at this device was no less than impressive.  With throughput reaching 3.4GB/s and IOPS breaking the half million mark, the consensus was that it could be capable of top marks when the finished product hit consumer, oem and even enterprise applications.  Our report today rips apart one of the first SSDs to contain the E12; the Corsair Force Series MP510 NVMe SSD. 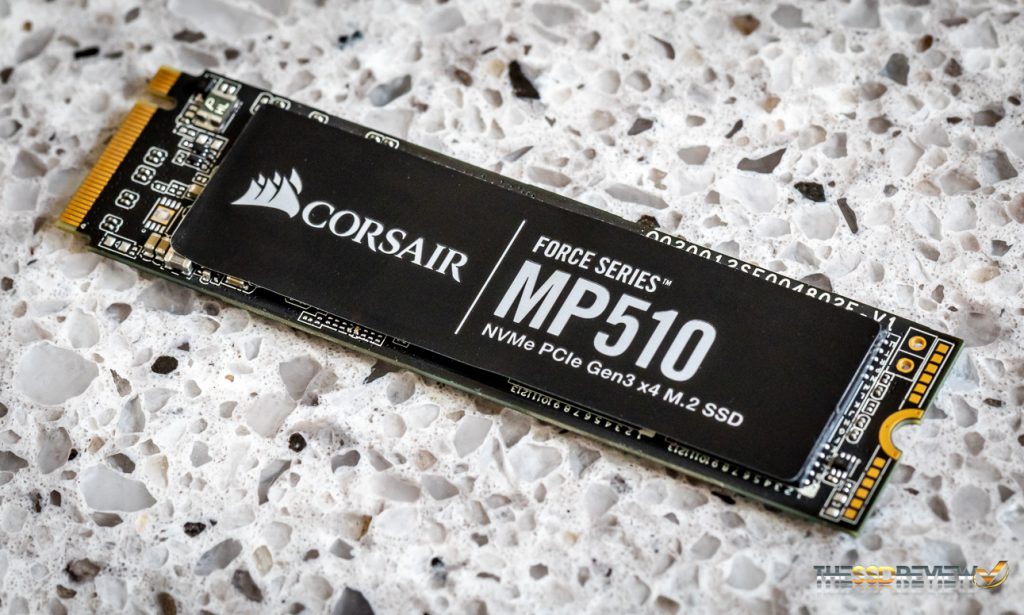 The Corsair Forces series MP510 NVMe SSD is aimed directly at those involved in content creation and PC Do-It-Yourselfers…the gamers.  In the content creation world, the faster we can move and manipulate video, audio and photos, the more efficient our work becomes which means we complete the job sooner or get more done in less time.  For gamers, they are hoping for faster load and scene transition times.  Every second counts.  Our instant everything world digitally is the result of flash technology advances, as well as SSDs such as the Corsair MP510.

The Corsair Force Series MP510 is a NVMe PCIe 3.0 SSD that supports the latest NVMe 1.3 protocol and will be available in 240GB, 480GB, 960GB and 1920GB.  Specifications are variable depending on capacity and the sweet spot in performance lies in the 960GB that we are testing with 3480MB/s read and 3000MB/s write and 610,000 read IOPS and 570 write IOPS.  Very impressive is the warranty which is a full five years.  Active read is listed at 6.5W with 5,6W write and 30mW idle power consumption.  Another feature Corsair speaks to is effective thermal management and its ability to channel heat away from the PCB, as well as Corsair’s own SSD Toolbox for monitoring and maintaining your SSD, which can be found here.

Looking at the SSD, the first thing that grabbed our attention was that it was a double sided SSD, meaning that the NAND flash memory was situated on both sides of the PCB, something we haven’t seen in a while.

There are also 4 pieces of Toshiba 3D BiCS3 64-layer TLC NAND flash, each with a RAW value of 256GB, as well as 1GB of SK Hynix DDR4 DRAM chip. Once formatted, this SSD provides 894GB of usable storage space for the consumer.  You might notice that the physical build of the Corsair Force Series MP510 NVMe is very similar to our Phison PS5012-E12 Controller Preview but for the PCB itself.

We expect at least the 1TB version of the Crucial Force series MP510 to be available on release with an MSRP of $239.99.  This is a very good thing in the start of what might be just a bit of a price war with the MyDigitalSSD 1TB NVMe SSD with an MSRP of $259.  Check Amazon for pricing now!