Two characteristics that became very important with the introduction of CFexpress as a mainstream storage medium were temperature and sustained write speeds.  We measure temperature by monitoring and updating a  Crystal DiskInfo Benchmark while a large 85GB 8K file transfer is being performed.  This is the extreme of what one might see in this environment.  An important aspect to remember is that the temperature results we obtain are the extreme.  They are the hottest the card got during any period of our testing which was constantly monitored.  It does not speak to the median or typical temperatures one might expect which would be around the low 30°C mark.

With his in mind, the highest temperature reached with the Lexar Professional was 82°C and there was no throttling of this card any time during our testing.  In comparison, the ProGrade Cobalt 160GB Type A Memory Card reached the same temps but had some serious throttling and data transfer failures as we will discuss below.

We determine sustained write performance by transferring a 85GB 8K media folder from the PC to the CFexpress Type A card.  This test is vital to those looking at digital storage for high end 4K and 8K video recording. 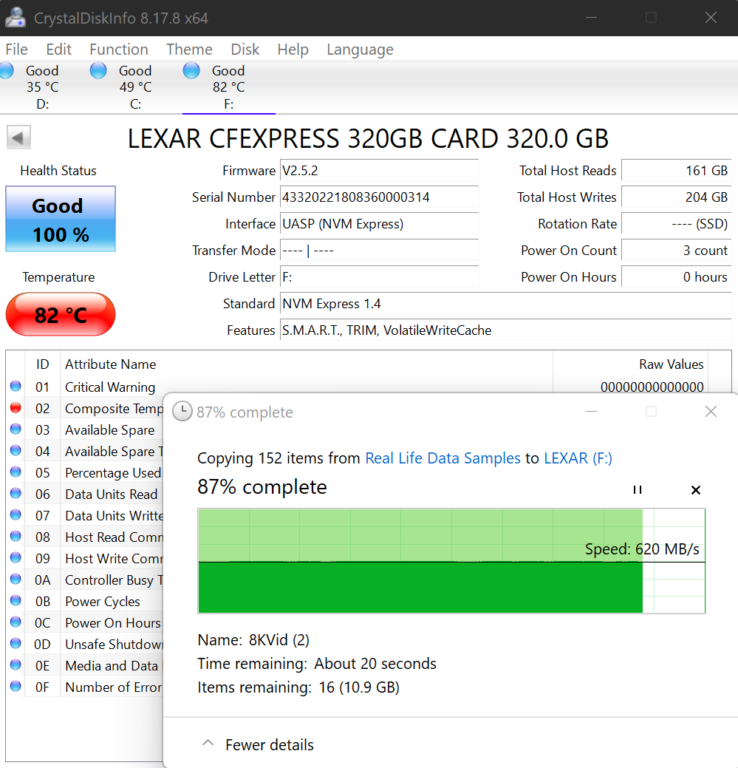 The Lexar Professional GOLD 320GB CF Express Type-A Memory Card held a sustained write speed of 620MB/s throughout the transfer which is well above the minimum standard of 400MB/s.

Our Real World File Transfer Test is conducted through the transfer of data from one spot on the test drive to another to give us the truest of transfer speed results for that device.

It would be nice to have a comparable other than a different capacity same card for this result, but unfortunately, the only competitor card that we have on hand could not complete these tests…which in itself says quite a bit for the Lexar Professional CFExpress Type A Gold Series Memory Card.

As we move to higher speed storage such as we see with CF Express cards, capacity is everything and we will definitely be seeing capacity increases with new memory being introduced as such as the latest Micron 232-layer 3D TLC NAND.  The release of this Lexar Professional GOLD CF Express Type B Memory Card speaks to 8K recording on its packaging and recording in 8K means capacities such as this 320GB are absolutely necessary.  Listed performance specifications of 900MB/s read and 800MB/s were easily surpassed as was that all important VPG400 rating which toped out just above 600MB/s.

The Lexar Professional GOLD CF Express Type-A 320GB Memory Card comes with an included dual Type-A/SD card reader and the card itself has Lexar’s outstanding limited lifetime warranty, while the reader has a 2-year warranty.  Pricing is just a bit high as it has been all along with all CF Express media but the upgrade to this performance is a definite jump in productivity.

The Lexar Professional Gold 320GB CF Express Type-A Memory card has great speeds up to 900MB/s, increased capacity of 320GB as well as a lifetime warranty.