CF Express Type-A memory cards are a particularly niche product restricted for the most part to those newer Sony camera lovers; Sony A7S III, A1 and A7 IV.  It was that mid-choice between XQD and CFExpress Type-B but then XQD saw firmware upgrades enabling CFExpress Type B which left Type-A on its own.  Our first showing of Type-A cards saw products from Lexar and ProGrade and the complaint of small capacity appeared where camera professionals needed more room on their cards to satisfy their needs.  After all, Type-B cards were coming out as high as 2TB.  Good news for Sony lovers this morning is that we have the worlds first Lexar GOLD CF Express Type-A 320GB Memory Card and Card Reader on our Bench for a few tests! 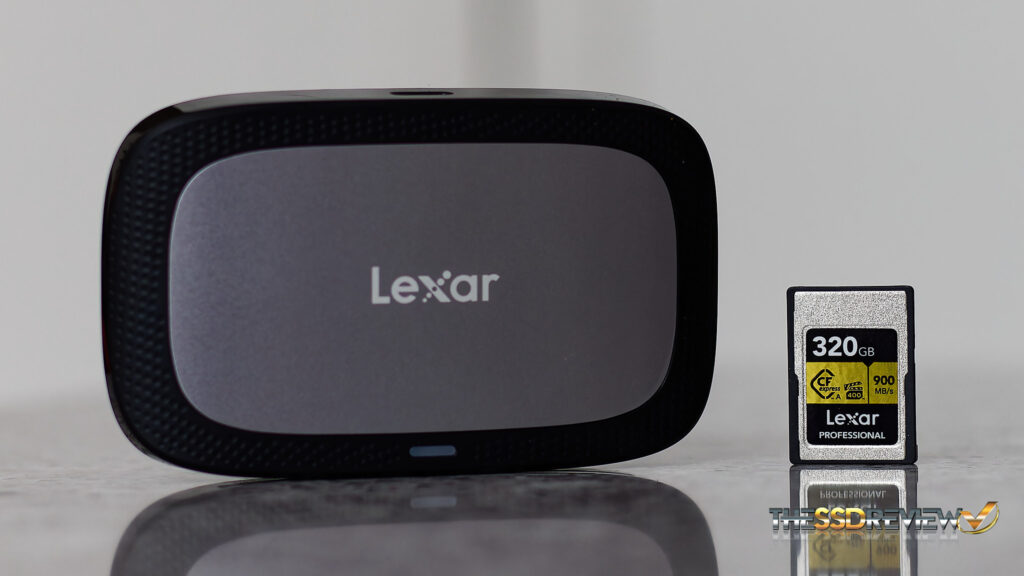 The Lexar GOLD series of CFExpress Type-A memory cards are available in 80, 160 and now 320GB storage capacities.  The 320GB version we are testing today has listed specifications of up to 900MB/s read and 800MB/s write with the all important VPG (Video Performance Guarantee) 400 rating.  VPG400 is a fairly new rating put forward by the SD Association which is the regulating body that oversees memory cards and it guarantees that this card will never fall below 400MB/s sustained write speed.

Checking Amazon, we see that the Lexar Professional GOLD 320GB Type-A CF Express Type-A memory Card and Reader lists for $599.99, which has dropped from its previous $699.99 list price.  Even with the cards limited lifetime  warranty (2-years for reader), this is still a bit high when comparting to Type-B pricing, but as expected for such a niche product.  Let’s take a look at some metrics.

CFExpress Card testing at TSSDR differs slightly, depending on whether we are looking at consumer or enterprise storage media. For our Lexar Professional CFExpress Type A 320GB Gold Series Memory Card testing today, our goal is to test in a system that has been optimized with our SSD Optimization Guide.