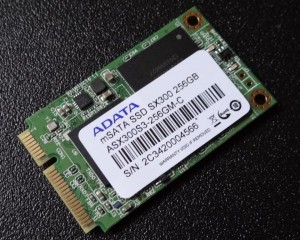 Following up on our recent review of the ADATA XPG SX300 mSATA SSD, we are now going to be running a similar analysis of the 256GB version of the same family.

We have been curious as to what this particular review would hold, as we had done a review of the MyDigitalSSD SMART 256GB mSATA SSD some time ago and identification of that mSATA SSD displayed that it was a rebranded XPG SX300 256GB device exactly as we are testing today.

If we find that the two are indeed one in the same SSD with a different sticker, the next question would have to be with respect to the pricing model as the MyDigitalSSD representation of this drive released, and is still available, at some of the best pricing one can find today for a ‘LSI SandForce Driven’ mSATA SSD, much less one that has been able to maintain the typical binary capacity points of 64, 128 and 256GB.

The ADATA XPG SX300 mSATA SSD is a 6Gbps mSATA SSD and available in capacities of 64, 128 and 256GB.  Of benefit to the consumer is the fact that ADATA is the first to produce an mSATA SSD with typical binary capacities while employing the LSI SandForce Processor, whereas, typical capacities prior were 64, 120 and 240GB.

This means that the consumer gets an additional 7% capacity in purchasing this SSD.  The XPG SX300 is available now and a quick look at Amazon

The XPG SX300 weighs about 7 grams, is a third the size of a credit card and just a bit higher than a 25 cent piece.  On it’s face, we find the LSI SandForce SF-2281 Flash Storage Processor (FSP) along with two modules of 25nm NAND flash memory, accompanied by two other memory modules on the back.

ADATA has yet to reveal exactly what memory is in use, only to state that the memory in use is synchronous and absolutely the cream of the crop which enables their manufacturing of this SSD in typical binary capacities.

We do know that each chip is 64GB in capacity for a total RAW capacity of 256GB.  Once formatted, total capacity available for the users needs drops to 238GB.  For testing in our Main Bench, we typically use an mSATA to SATA 3 adapter such as this: