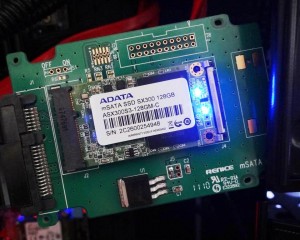 The popularity of mSATA SSDs is probably one of the more unexpected SSD trends to show its face and, even today, e-tailers just can’t seem to keep mSATA SSDs in stock.

With consumers now wanting the performance best in their mSATA capable laptops, ultras hitting the market, as well as a few motherboards now being shipped with integrated mSATA ports, this trend doesn’t seem to be letting up anytime soon.

In a few Lenovo laptops models, the mSATA became an answer to both performance and capacity as the SSD became the boot drive enabling the hard drive as strictly a storage medium.  Our SSD analysis today will look at another of the mSATA family as we examine the new ADATA SX300 mSATA 128GB SSD.

Through use of top tier NAND flash memory, ADATA is the first and still one of the few companies to provide both LSI SandForce performance along with typical binary capacity points.  To the average consumer who has chosen to remain with products that utilize LSI SandForce Flash Storage processors (FSPs), this means that ADATA can offer 7% additional user capacity with their product.  This might not seem like such an issue at first but it definitely bears mentioning that LSI SandForce has found their way into SSDs just about every consumer manufacturer short of Crucial/Micron and Samsung. At last count, I believe they were up to fifty partner agreements.

Where we once saw LSI SandForce controlled SSDs in capacities of 60, 120, 240 and 480GB, ADATA is now able to offer their products at the typical binary capacity points of 64, 128, 256 and 512GB.  This was first examined in our initial review of the MyDigitalSSD mSATA SMART SSD, a SSD that was found to be a rebranded 256GB variant of the very SSD we are looking at today.

The SX300 contains the LSI SandForce SF-2281 FSP along with four modules of NAND flash memory that are indiscernible from their markings, however, we have been unofficially informed that they may be four 24nm MLC modules of Intel’s finest NAND flash memory.  ADATA advises that, in order to be able to achieve their capacity points with the LSI SandForce FSP, they had to use the best of the best memory available.

Although there is a total of 128GB RAW capacity, a small amount remains proprietary to firmware needs and, once formatted, the total user available capacity is 119GB.