While synthetic workloads do a great job of testing the underlying technology and reporting easy to understand results, they aren’t always indicative of how the drive will be used by the end user. Workloads that simulate enterprise environments try to bridge that gap without being overly complex. 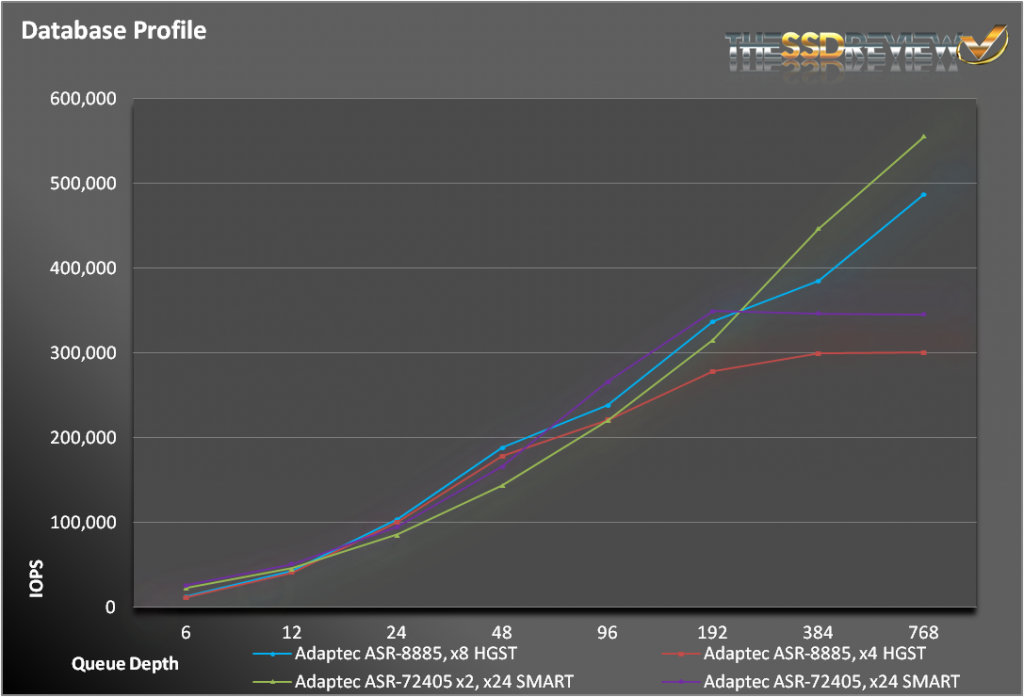 The database profile is 8K transfers, and 67% percent of operations are reads.

Our Series 8 setup took no mercy on the database profile.  With nearly 500K IOPS, it easily blew by the Series 7.  Only a pair of Series 7 and 3x the number of drives was able to get a higher score, and even then, by less than 15%.

The fileserver profile is based on an 80% read/20% write mix. Its made up of blocksizes from 512 to 64K, each making up a different percentage of the access pattern.

In this test, the Series 7 and 8 were pretty evenly matched.  The larger block sizes probably account for the closeness of the results.  The 24 SSDs in the Series 7 setup give it a clear advantage with large block sequential performance.

The webserver profile is similar to the fileserver profile, but has some additional 128K and 512K accesses thrown in for good measure. Additionally, the profile is 100% read.

Considering the webserver profile is so close to fileserver, but with more large block transfers, it was no surprise that the Series 8 fell behind the Series 7.

Now is a good time to reiterate that the Series 8 would do just as good, or better than the Series 7, given the same drive setup.  We were more interested in seeing if a 12Gbps solution was superior at lower drive counts.  Except for large block sequential transfers, where the number of drives play such an important role, the Series 8 held its own in many of the tests.