We took our ASR-8885 and paired it with both 4 and 8 SSD800MM’s from HGST.  We then compared it to the ASR-72405 with 24 SMART Optimus SSDs and then to a pair of ASR-72405s with the same SMART SSDs, split evenly.  It should be noted that with the Series 7, the performance topped out before 16 drives.  Even though we did not have 16 identical SSDs on hand, we believe that the Series 8 would be nearly even on most tests, based on specifications.  So, we wanted to know what would perform better, a bunch of 6Gbps SSDs or a handful of 12Gbps SSDs.  Lets find out. 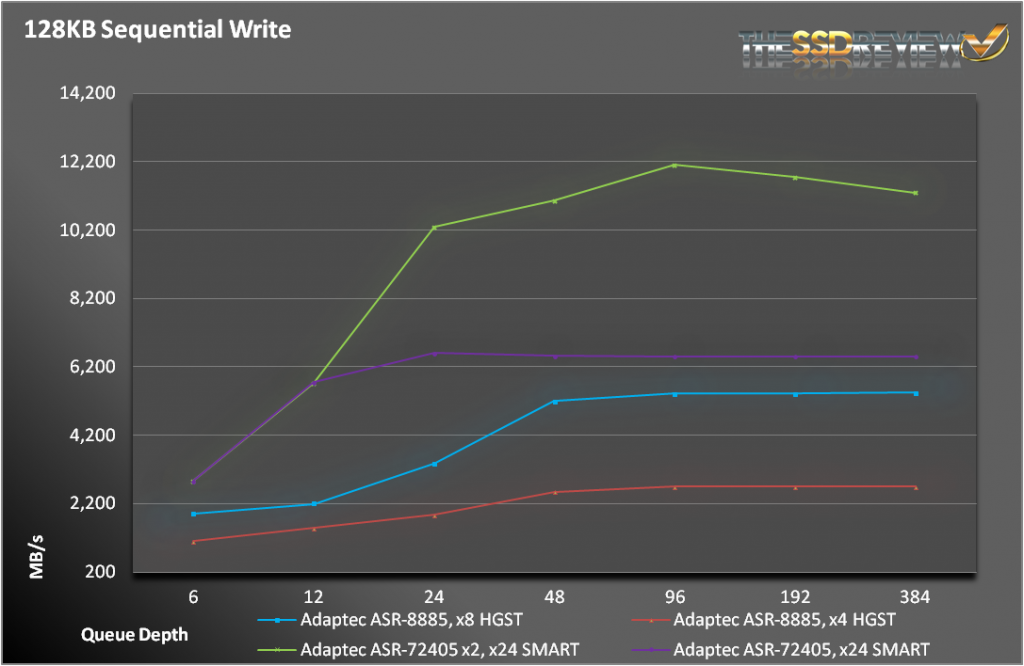 For sequential writes, eight 12Gbps SSDs were just not enough to match the parallelism and raw power of 24 SMART Optimus SSDs.  Even at nearly 700MB/s, the eight SSD800MMs were not quite enough to saturate the ASR-8885.  We would have needed at least one or two more to clear 6GB/s.

Read operations didn’t have nearly as many problems reaching 6GB/s.  In this test, the 8 HGST SSDs held their own against the 24 SMART SSDs.  The Series 8 solution trailed at lower queue depths mainly because there was only 1/3 of the drives to spread the IOs across.  At higher queue depths, there was only a 200MB/s difference.

Random operations is where the superiority of the 12Gb solutions shows itself.  In 4K writes, the Series 8 was 35% faster than the loaded Series 7.  It was still no match to a pair of ASR-72405s, but 500K IOPS is still incredibly impressive.

Even more impressive than 500K write IOPS is the 700K read IOPS that we got out of our Series 8 system.  A single ASR-8885 with eight SSD800MMs beat out a pair of ASR-72405s with 24 SMART Optimus SSDs at 4 out of 7 queue depths.  Even though the Series 8 fell a few thousand IOPS short of taking the crown for most IOPS, it lived up to all expectations.