Rocket XTRM-Q 16TB External Thunderbolt 3 SSD Review – Can an SSD Ever be Too Big?

Well, Sabrent seems to have pulled off something that we don’t expect to see any other manufacturer do anytime soon.  Not Samsung.  Not Crucial.  Not Intel, Toshiba, Lexar, Team Group, Transcend, Mushkin, XPG, Corsair, WD, Seagate, ADATA, Corsair and not Silicon Power.  Sabrent has thrown down the gauntlet and we want all to know that we are willing to accept samples if anyone wants to accept that challenge.  Sabrent has just released their latest Rocket XTRM-Q External Thunderbolt 3 SSD and it is a MASSIVE 16TB in size. 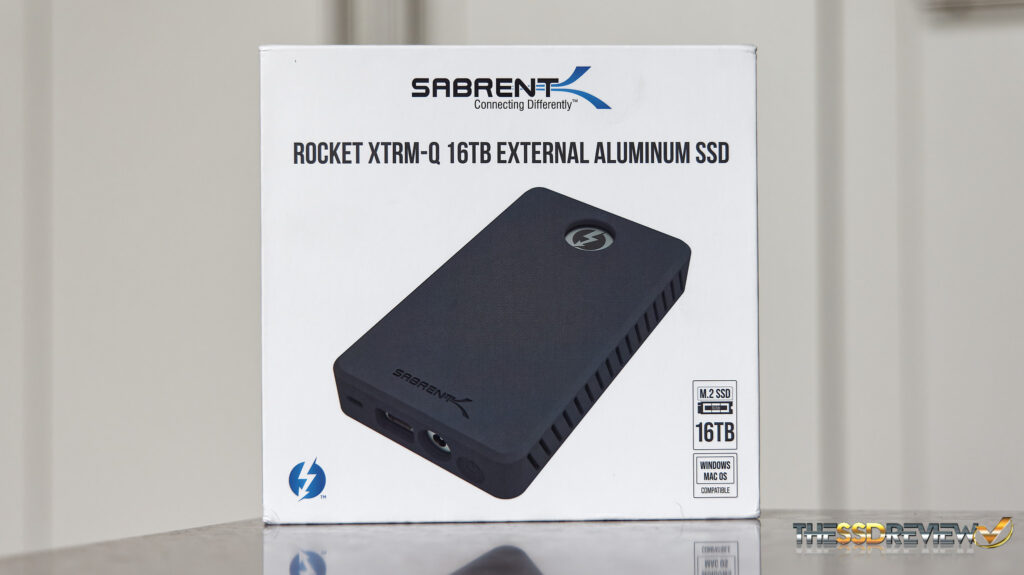 The Rocket XTRM-Q 16TB External Aluminum SSD comes in one size and one size only…16TB.  It is a Thunderbolt 3 external SSD that can be set into your PC as two logical 8TB partitions, or RAID 0 for 16TB.  Using the drives independently in a JBOD setup gets you up to 1.5GB/s transfer speeds while creating that RAID 0 drive will push performance up to 2.9GB/s.  If you want a more secure and safe storage setting, RAID 1 can also be setup.

Right about now there just has to be someone saying RAID 0…No way!  Actually, this is much more sound than you might think.  The typical SSD has been shown to have a 0.58% chance of failure over its lifetime…or 1/200 SSDs fail.  Personally, I believe that to be dated and reality is much less.  We can use this though.  Since we know that two SSDs in a RAID 0 doubles the chance of failure, that failure rate maxes out at only a 1.16% chance.  So go ahead and feel comforted that SSDs bring you an ideal performance and capacity variable in RAID 0.

The Sabrent Rocket XTRM-Q 16TB External Tbt3 Aluminum SSD comes with the Rocket XTRM-Q itself, a silicon casing, Tbt3 cable and a power adapter.  It is plug and play, Windows and Mac compatible, and there are very easily understood instructions that will let you set things up as you please, and show you exactly how to optimize for best performance.  The exterior of the Rocket XTRM-Q is exactly the appearance as the 8TB version we reviewed some time ago, just a tad bigger as it houses two 8TB SSDs.  It is a solid grey aluminum with a very smooth cut and amazing feel.

Left to right on one end, we have two LED lights for disk activity, a Tbt3 Type-C port, DC-IN and the power switch.  As soon as we powered ours on, it was immediately recognized and we were up and running.  There is a small TORX screw located under the metal Thunderbolt on the top which allows access to the inside of this device.

Inside we find two Sabrent 8TB Rocket Q NVMe SSDs that are actually stuck to the cover with thermal padding for heat dissipation. Setting these into a RAID configuration is done through your OS Computer Management/Storage console for Windows 10. Did we mention that this is Thunderbolt certified by Intel?

The Sabrent Rocket XTRM-Q 16TB External Aluminum SSD isn’t cheap, and we are certain nobody would expect such.  Checking Amazon, we can find it priced at $2899.

Let’s check out the performance.