Occasionally at TSSDR, a number of things fall in place where we think that a new build might be best to highlight new hardware.  Such is the case with our receipt and significant testing with the latest and greatest from ASRock, the ASRock Z87 Intel based Extreme11/ac and AM3 based Fatal1ty 990FX Killer AM3+/AM motherboards.  Their sheer design is a huge step forward as the Extreme11/ac is chock full of storage possibilities with its 6 Intel ports, dual mSATA slots, dual ThunderBolt 2.0 ports, 12 USB 3.0 ports, in addition to 16 SAS SATA ports that are tied into a LSI SAS 3008 controller and 3x24R SAS/SATA Expander that make high volume SAS/SATA connections quick and easy.  Don’t believe us?  Check out our testing of HGST SSD800MM SAS 12Gbps 400GB enterprise SSDs where we reached an amazing 6.1GB/s transfer speed and 850K IOPS. 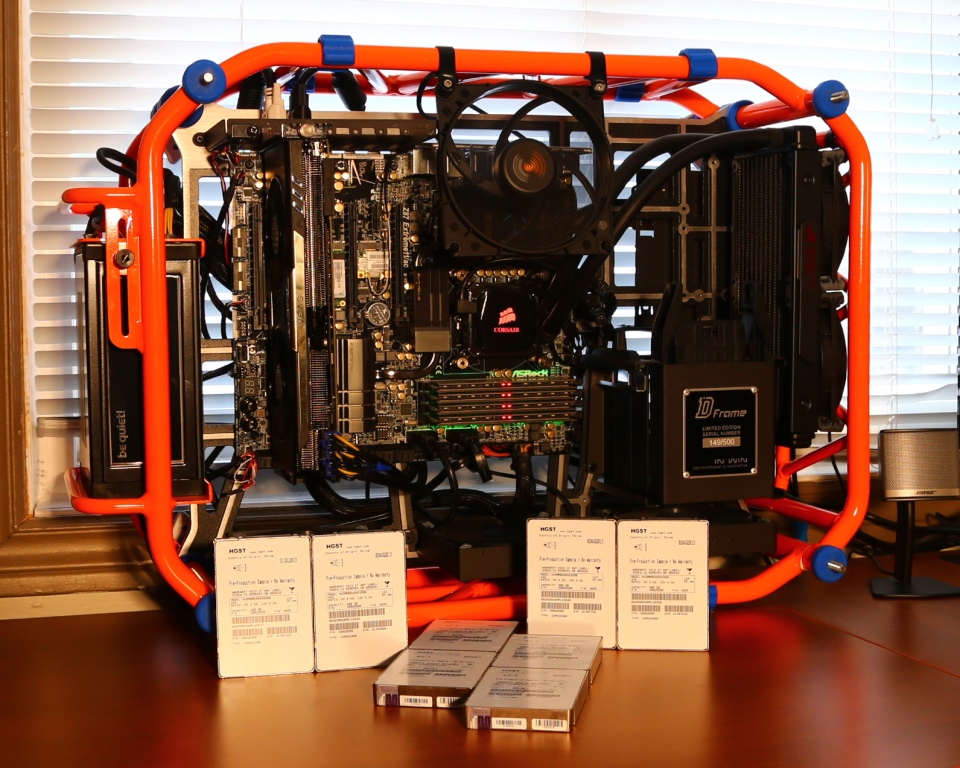 The ASRock Fatal1ty 990FX Killer was no different as it was the first motherboard released with an integrated native PCIe X2 M.2 connector, not to mention that this connector was compatible with both PCIe and SATA M.2 SSDs.  Check out our validation of eight of these SSDs, to include first releases from Samsung (PCIe x4), Plextor (PCIe X2), Toshiba (SATA 3), Crucial (SATA 3),  ADATA (SATA 3), SuperTalent (SATA 3), and MyDigitalSSD (SATA 3).

You may notice that this AMD system is set in a new Test Bench that included sponsored equipment from our friends at Cooler Master, the key of course being their newest CM HAF Stacker 935 EATX chassis.  The fact that the chassis fit EATX boards, and was a stackable system, created a unique thought that we might just be able to create a dual stacked Intel/AMD system using two HAF Stacker 935 chassis’, thus making more office space available in our office that presently contains 8 PC systems.  Let’s have a look at the single Cooler Master HAF 935 chassis to start:

There are a number of things that we like about this chassis, not to mention the fact that the top 915 chassis was fully capable of containing a mini-ITX system and could be removed.  Front cages could be quickly placed or removed with the CM locking system rather than screws, it had plenty of space and, the side window afforded plenty of viewing which is a ‘must have’ in our world.  One thing we didn’t like, however, was that a dual width liquid fan cooler couldn’t be placed within the chassis itself.  In our case, we used the CM Glacer 240L in the AMD system and it had to be installed in the top 915 chassis.  Add on a few CM SickleFlow blue, red and green fans and things were on their way!

Before getting to particulars of the build itself, we though we might discuss our display configuration for a bit as many might appreciate the fact that we have been able to connect 3 x 27″ 2560×1440 monitors to each system, this being at a value of less than $1000 for all three.  Bit hard to believe?  Take a look.

Some time ago, we caught wind of no name Korean companies that were purchasing and using Samsung boards in their monitors and able to provide them at an incredible price.  Timing was perfect as we were about to shell out big bucks for three 2560×1440 monitors.  With a little digging, we were able to find the monitors at just over $300 each, each has multiple input ports (DVI, HDMI, Display, VGA), and we were able to get each running at 120Hz without any difficulty whatsoever. Our complete report on the QNIX QX2710 monitors can be found at our sister site, Technology X.

For the mounting of these monitors, we did a complete report on the Rosewill RHMS-13002 Dual Swing Arm Mount and, as well, purchased a few Rosewill RMS- MA3210 Wall Mounts for the far left monitor, and others in the office.  We felt both mounting systems to be the best (by a long shot) after some extensive background investigation into various mounting systems.  There would be nothing worse than seeing a dual 27″ monitor setup lying on the floor when returning to work one morning as a result of a cheap mount.

Without realizing it, we discovered an added benefit on completing the setup.  Effectively using the rear ports and cabling (DVI/HDMI/Display) we could effectively connect both Intel and AMD systems to the monitors at 2560×1440 resolution.  This allowed use of triple monitors for either system, or dual monitor for one with single monitor for the other. Not a bad way to start things off…