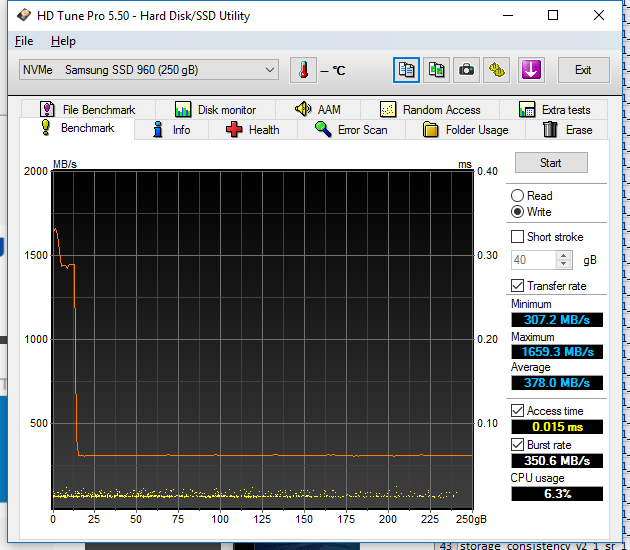 Moving onto our traced based benchmarking, utilizing PCMark, we gained a bit better insight. With a score of 341K the 1TB 960 EVO scored the highest score we have ever seen in testing in PCMark Vantage. The 250GB model was very close as well, just a few K points away. PCMark 8’s extended testing revealed an interesting performance result. Compared to the competition, the 250GB model’s latency is much higher under heavy workloads. It did, however, recover quickly and the results during the recovery phases were much better than during the steady state and degrade portion. The 1TB model didn’t seem to have the same issues as the 250GB in this test. It maintained competitive performance throughout the test. It even nearly tied with the 2TB 960 Pro as the best performing drive in the recovery rounds. After this, we showed how well the drives performed with PCMark 8 Standard. There the 960 EVOs were beat out by the OCZ RD400 and 950 and 960 Pros, but, the 1TB model did beat out the Intel 750 400GB. With overall average bandwidths of 486MB/s and 552MB/s, they both put on a good show and easily out performed their SATA counterparts.

When we wrapped up our PCMark runs, we threw out 30GB transfer test at these bad boys to see how they held up to the challenge. The 1TB model tackled it with ease and averaged the same as the 2TB 960 Pro. The 250GB model’s Achilles heel was revealed in this test however. Its TurboWrite buffer is only 13GB, meaning that after that its write speed drops to just 300MB/s when you write to it anything past the 13GB mark. When transferring over the 30GB of movies it averaged 479MB/s, which placed it behind the SATA based 1TB 850 EVO on the chart. In addition to the performance results from the 960 EVO, the power consumption results were also good. At idle they were the lowest power consuming PCIe drives and looking at efficiency metrics, the 1TB was second to the 960 Pro and the 250GB model outperformed the Intel 750 and Kingston HyperX Predator.

Finally, we wanted to show the base write performance of the 960 EVO to our audience, so we fired up HDTune. During the run the drives performed how they should. The 250GB model’s write performance dropped to 300MB/s after the initial SLC buffers and the 1TB model dropped down to 1200MB/s. Interestingly, however, the 1TB wound up dropping down a bit more to just over 1GB/s. Still, for the most part, that is more than enough for anyone use.

Sure, the 960 Pro offers you a few more MB/s bandwidth and higher IOPS and more consistent write performance over the 960 EVO, but with the extremely competitive pricing, we would recommend the EVO over the Pro more often than not. Unless higher endurance is needed or you are someone who wants the best of the best for that extra E-Peen, the EVO should be more than enough to satisfy. The Samsung 960 EVO is one of the best bangs for the buck in the high performance mainstream consumer category. Unless you are running heavy workloads, the Samsung 960 EVO should suite fine for almost any job you throw at it. Its speeds are blisteringly fast with read & write performance of up to 3.2GB/s & 1.9GB/s, it is efficient, and it could be the next SSD for you, especially if you are a Samsung SSD fan boy like so many are. If you are in the market to buy a new M.2 NVMe SSD, be sure to…

Check out the Samsung 960 EVO at Amazon Today!

A Transformation From SATA to PCIe

If you are in the market to buy a new M.2 NVMe SSD, be sure to check out the Samsung 960 EVO. It is a top value competitor that delivers killer performance for a great price. It delivers blisteringly fast speeds and looks good doing it.