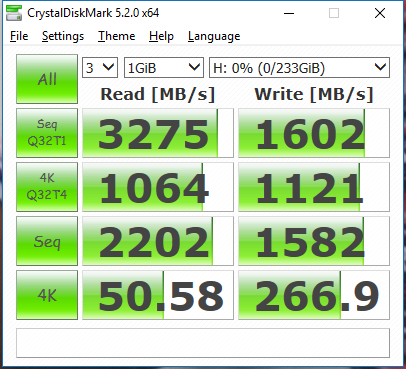 Crystal Disk Mark gives some good results. The 250GB model achieved 3.2GB/s read and 1.6GB/s write while the 1TB model got a bit lower than rated performance in the sequential category with 3.1GB/s read and 1.7GB/s write. Looking at 4K read speeds, they look to be good. They are in line with SATA 850 EVO scores, if anything, a bit better. 4K write performance is also very good with scores around the 250MB/s range. The 250GB model seems to have a bit better performance in this test overall due to the double mount of DRAM to NAND ratio.

Overall, in AS SSD, the 250GB 960 EVO reached 3825 points while the 1TB model reached 4305 points. 2.8GB/s reads were achieved by both models and both were also able to achieve their rated write specs: 1.6GB/s and 1.9GB/s. 4K read and write are similar to CDM’s results, only AS SSD’s write is a bit lower. Here we can also see that the 250GB model hit 320K/280K IOPS read/write and the 1TB model reached 370K/320K. In the Copy test, both delivered similar results with the ISO result being the fastest at nearly 2GB/s speed for both models.

In Anvil Storage Utilities, the 960 EVOs did very well for themselves. The 250GB model reached 13.3K points and the 1TB model reached 14K, although, this is nearly 2K shy of the 960 Pro’s score of nearly 16K we got last month. Sequential read speeds are lower than the rated values, but write speeds are on point. 4K speeds are in line with the other tests as well. Let’s move on to our trace based benchmark tests to see how these 960 EVOs perform in a real-world use case.