Just when we thought the news of the Innogrit SSD Controller was going to take over the SSD industry, watch out!  ADATA not only had their sample of the ADATA Innogrit based Sage on display and running at 7GB/s, but they also had two other SSDs on display that were both Gen 4×4 and SMI products… one that listed specs at 7GB/s read and 6GB/s write. 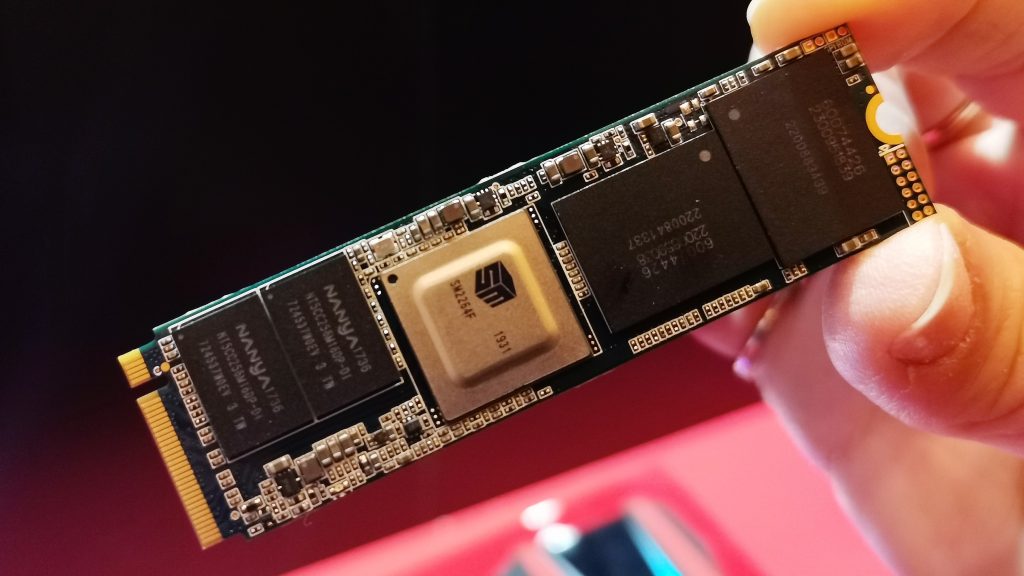 This is the ADATA Indigo PCIe Gen 4 Series NVMe SSD.  It contains an all new SMI SM2264 PCIe Gen 4 controller and its specs are listed at 7GB/s read and 6GB/s  with up to 700K read and write IOPS.  This SSD may be available in capacities up to 4TB and have LDPC ECC and RAID engine, along with end-to-end data path protection.

The ADATA Pearl is also SMI based and has the SMI SM2267 NVMe Gen 4 SSD controller.  Just as the Indigo, it will be available in capacities up to 4TB, have LDPCC ECC and RAID engines and end-to-end data protection.

This photo depicts the ADATA 900G RGB Portable SSD on the left and the SE770G RBG Portable SSD on the right. They are both the first of their kind that we are aware of, a clear black when not plugged into a power source with the RGBs as displayed when plugged in.  Both are USB 3.2 Gen 2 with a Type-C  port and both will be available in 512GB, 1 and 2 TB capacities.  The 900G will reach performance of 2GB/s read and write while the SE770G will be capable of speeds half of that.

No additional information was available and we might guess you will be seeing more on this product around Computex in June 2020.  More info will be available just as soon as we get review samples in hand.