SSD of the Week – The Plextor M6e

When building a gaming PC, the first thing you think of is speed. What is a better way to speed up your experience than to buy an SSD? But wait, you can’t just get any SSD, you need something bleeding edge to show off and brag about right? Which is why in this week’s SSD of the Week we are going over the SATA 6Gb/s barrier breaking Plextor M6e. This year at the Flash Memory Summit it even won the best of show award. 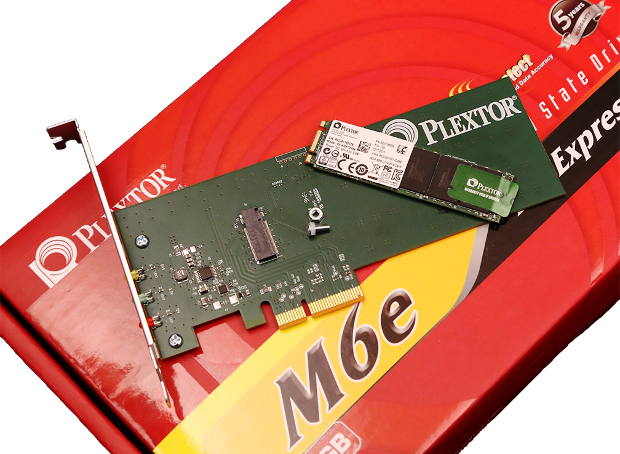 The M6e supports both legacy and UEFI BIOS booting, which makes it compatible with a broad range of systems and configurations.  This setup permits the system to initiate all of the storage devices simultaneously, dramatically reducing boot times and improving efficiency.  Driverless AHCI (Advanced Host Controller Interface) compatibility eliminates the need for any additional drivers.

Plextor also has an SSD utility you can download called the Plextool, which allows for monitoring SMART data, secure erase, and check for firmware updates.

For their quality control, Plextor uses a Zero-Failure, Zero Error mass testing standard that incorporates extensive burn-in testing of every individual SSD to ensure reliability and performance. And as an end result to this, their estimated Mean Time Between Failures (MTBF) is at 2,400,000 hours and the drives are covered by a 5 year warranty.

With its high quality controller, NAND, and in house designed firmware, the Plextor M6e is a reliable and fast SSD.  If you are in the market for something that will speed up your PC, check this SSD out and see if it is the one for you.

Check out the Plextor M6e on Amazon today!