Considering the path OCZ has taken throughout the years from saturating the market space with several different options in their SSD line, right up to their purchase by Toshiba and change of focus to premium SSD releases, most wouldn’t expect an entry level release any time soon.  They would be wrong and, although they may be describing this as an entry level SSD, its performance seems to be anything but. 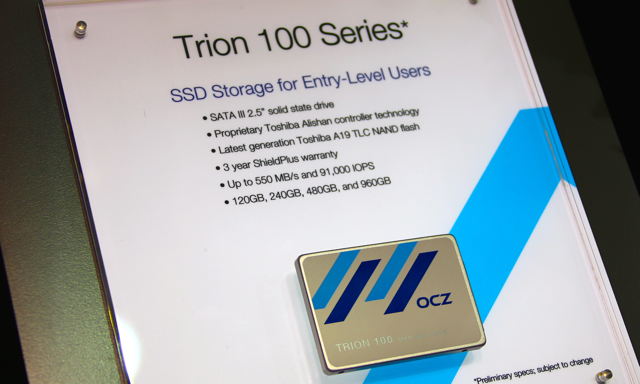 The Trion 100 is going to be released as an entry level solution by OCZ and it is based on Toshiba’s newest Alishan controller technology.  Specifications list it as up to 550MB/s read and write throughput, up to 91K IOPS, and its warranty will be three years.  A quick look at this performance chart, however, provides something of interest that many might originally overlook:

Most manufacturers might display ATTO results when showing off their drive, and some might even display the Crystal DiskMark result on the right.  Very rarely would we see AS SSD benchmarks at tech events, however, because AS SSD tests in 100% incompressible data samples, dropping SSD performance significantly.  The performance we are seeing here and specifically within the Crystal DiskMark and AS SSD results, is indicative of what we see presently in today’s premium offerings.  This will fare well for OCZ should they offer such a strong contender at a entry level price, and compound that with the Toshiba name now in the mix as well!

As we move into enterprise SSD territory, we get a first look at the newest OCZ Z-Drive 6000.  This SSD is a NVMe SSD and ‘hot plugable’ with a SFF-8639 connector.  It’s performance is over 2GB/s read and write, up to 700K IOPS and it comes in 800GB, 1.6TB and a massive 2.2TB capacity within this very same form factor.

Right beside the Z-Drive 6000 is its PCIe twin (still NVMe) the Z-Drive 6300.  Performance on this enterprise SSD bumps to 2.9GB/s read and write, maintains the 700K IOPS but it’s capacity bumps to a massive 6.4TB in a single HHHL formfactor.  This SSD is also equipped with Toshiba eMLC NAND Flash Memory, has Power Loss protection (PLP)  and is listed at 30DWPD for 5 years endurance.