Intel Z97 based motherboards will be making their appearance very shortly and, once again, ASRock seems to flexing their muscle. If you remember their release of the Z87 series, they literally blew away competitors by releasing the Fatal1ty Killer AMD board with the worlds first native PCIe x2 M.2 socket, accomplishing the task of breaking that infamous SATA performance barrier (see report) 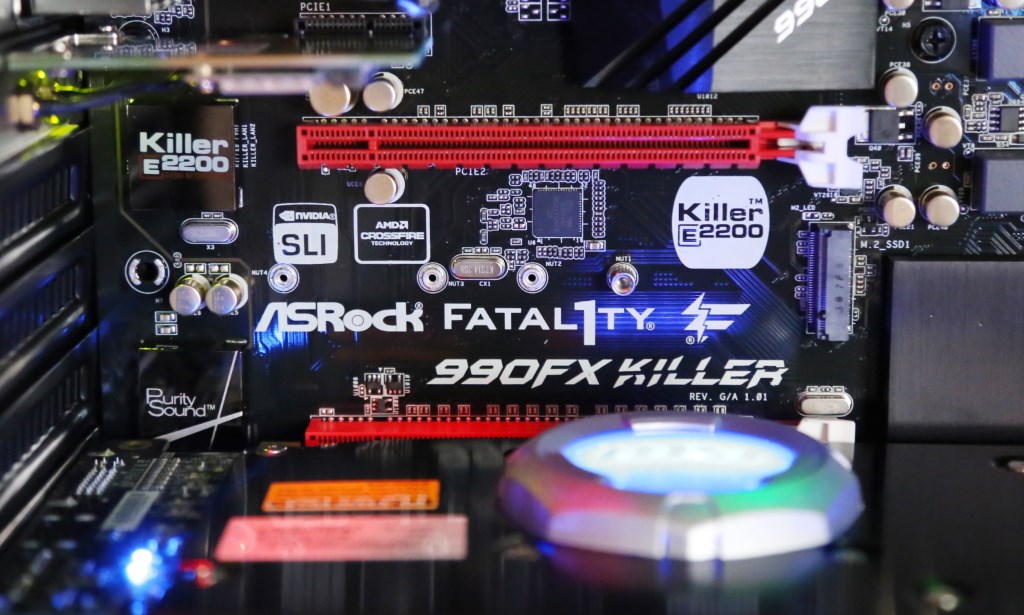 As if that wasn’t enough, their Intel based Z87 release of the Extreme 11/ac contained a whopping 22 SATA ports, the LSI SAS 3008 12Gb/s SAS controller, along with the LSI 3x24R expander which allowed the plugging in of 16 SATA or 8 SAS SSDs. Check out this report where we reached 6GB/s and 850K IOPS using 8 HGST 12Gb/s SAS SSDs.

We have a fairly great working relationship with ASRock, and I wouldn’t say we might be influencing things at all, but the one complaint we had last round was NOT being able to connect our Samsung XP941 M.2 SSD at full PCIe 2.0 X4 speeds. We are happy to report that things have changed significantly with new Z97 ASRock boards. Not only do all but one contain a native M.2 Gen 2 x2 connector, but more importantly, the Extreme 6 contains what ASRock terms as an ‘Ultra M.2’ built on a PCIe Gen 3.0 4 lane base. This provides for up to a whopping 32Gb/s transfer speed from a single M.2 SSD. Is that future proofing things or what?

Now, we know that M.2 PCIe SSDs won’t be capable of 32Gb/s blazing performance for years to come, but this is going to be a very welcome addition for those companies putting out native M.2 PCIe x4 SSDs later in the year. If you have been following our reports, you would know we already have 2 x Samsung XP941 M.2 PCIe x4 SSDs on hand that we have reported on several times, but this isn’t all that the SSD arena has in store for us.

If you remember our coverage of LSI AIS last fall, our follow up article on Understanding M.2 Standardization, or that of CES this Spring, you would have seen our reports of the LSI SF3700 flash controller, capable of 1.8GB/s, and the Marvel Altaplus 88SS9293 Controller, believed to be capable of 1.4GB/s. Don’t get me wrong. We are not saying that there will be a flood of native M.2 PCIe Gen 2 x4 SSDs available on the retail market anytime soon, but Computex seems to be promising some great things.

Let’s explore the M.2 storage possibilities of the new ASRock Z97 motherboard a bit more closely though. We know we can plug in the Plextor M6 M.2 PCIe x2 SSD for speeds up to 750MB/s and we know that we can also plug-in the Samsung XP941 PCIe X4 SSD for speeds above 1.1GB/s. Consider for a moment though that we can also RAID M.2 SSDs from both M.2 slots, whether they be native M.2 or SATA. This surely enables great performance considerations in a style that takes up virtually no space whatsoever on the motherboard.

As we see things from our ‘storage’ perspective, ASRock is definitely leading the pack in the motherboard world as of late. It is great to see motherboard manufacturers finally paying attention to the single most visible performance upgrade shown in any PC system for the last several years.

Last but not least, we convinced our friends at ASRock to give us a bit of an exclusive in their marketing material for their upcoming Extreme 6 and ‘Ultra M.2’…take a look on the next page!