Every now and then, we are fortunate to have SSDs reach our bench that one might not normally find within every day PC systems or servers.  Our review today of the Super Talent DuraDrive AT7 SSD is just that; a SSD fully intended for the automobile industry, and more specifically In-vehicle Infotainment Systems.  Unlike other examples that we have reviewed though, the DuraDrive AT7 is no more than a SATA 3 notebook size SSD and can easily be flipped inside any PC, as much as it might be used for completely different designs within the auto industry. 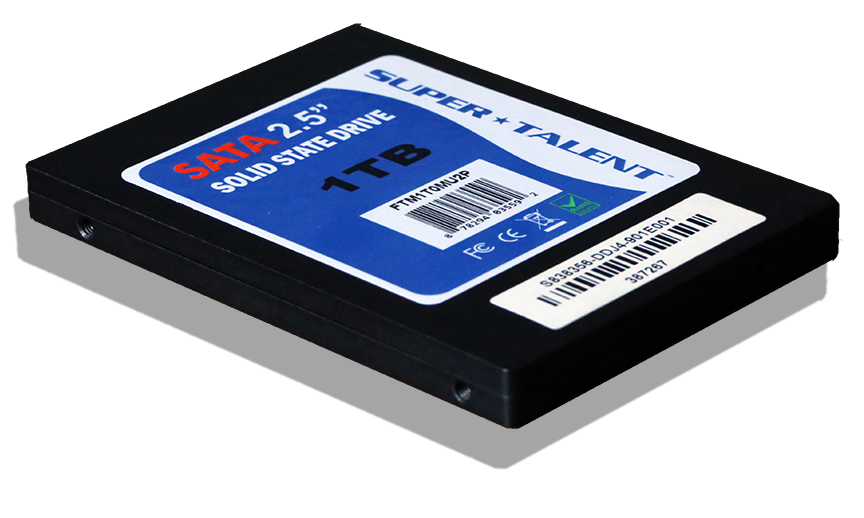 As this SSD is not available to the consumer, we could not guess at such things as pricing or warranty, but nevertheless, there is an angle we wanted to follow with this drive as it contains the newest Silicon Motion SM2246EN SATA 3 controller.  This controller has steadily gained recognition as being a quality product within recent months and some are starting to even believe this may be a threat to Seagate and its present  SandForce line.  Very least, it sure seems to occupying a space with many manufacturers who might have normally filled that with SandForce’s newest, post the SF1200 series. Silicon Motion is hosting this controller in SSDs manufactured by Corsair, Patriot, AData, Kingspec and Angelbird, to name but a few.

The Super Talent DuraDrive AT7 is available in capacities from 32GB to 1TB, is a 6Gbps SATA 3 notebook form factor SSD, and can be custom-built to the buyers needs using SLC or MLC memory.  It can withstand temperatures of -40°C to 85°, vibration up to 16G, shock to 1500G and is also dust proof.  Performance is listed as being up to 500MB/s read, 400MB/s write and having a disk access time of 0.1ms.

Exterior packaging is of a hard board exterior where the top simply lifts up from its magnetic seal on the bottom front.  This is typical Super Talent and I don’t think we have ever seen a different container for any of their products; our reviews tracing back several years.

Inside the package, we find the SSD, mounting screws and installation instructions.

DURADRIVE AT7 BUILD  AND COMPONENTS

The exterior of the AT7 is of a 2 piece metal construction, secured by four screws on the base.  One of these screws is covered with security tape and any damage to this would void any warranty that might be in place between Super Talent and the auto manufacturer.  Inside is a green printed circuit board (PCB) that contains the SATA 3 controller, two pieces of DRAM cache memory, along with 16 pieces of Micron NAND flash memory, eight on each side.

The controller in use is Silicon Motions new SM2246EN 6Gbps 4 channel controller and SMI lists performance specs as 540MB/s read and 410MB/s write with up to 80K IOPS for this drive.

Each piece has a 64GB raw capacity for an unformatted advertised total volume of 1024GB.  Once formatted, there is 994GB of storage available to the system in use.  Here is a closer look at the memory: