It isn’t too often that we’re reviewing SATA 3 SSDs these days.  The reason of course is that that bigger and better gets all the attention.  Data transfer speeds of 550MB/s are all to often forgotten when PCIe 4×4 is now moving data at just under 10x that.  Similarly, capacities up to 2TB are fairly common but we have really only seen Sabrent make available their Rocket Q 8TB M.2 SSD, and also, their totally expected Rocket XTRM Q 8TB Tbt3 Portable SSD that we reviewed most recently.  Take note Samsung; 8TB portable storage is here!

Capacity is pretty simple.  It increases as the footprint of NAND flash memory gets smaller and we have seen that from SLC to MLC to TLC and now the latest QLC.  Something often overlooked, however, is that there is a huge chunk of SSD users (and those moving up from a HDD) that are using SATA 3 SSDs in comparison to M.2 SSDs. 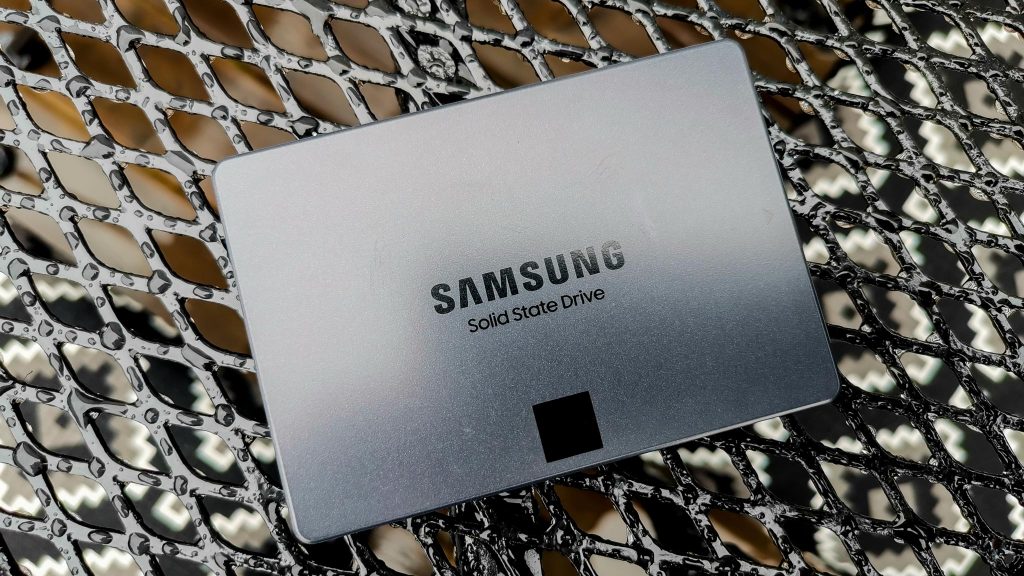 Our report today takes a look at Samsung’s latest QVO 870 which will be available eventually in 8TB, however our report today will look at the 1/2TB versions.  This SSD is using Samsung’s newest V-NAND NAND flash memory which is 5th Generation 3D V-NAND 92-layer NAND flash memory.  So if you are a bit confused about how this stores memory, simply think of an apartment building where the footprint might be smaller but the the increase in floors allows more apartments. Only in this case those floors are 92-layers high.

The Samsung QVO 870 is a SATA 3 (6Gbps) SSD and available in the 7mm 2.5″ form factor.  It is presently available in 1, 2, and 4TB form factors with 8TB available in August. Check Amazon. It’s performance is listed at 560MB/s read and 530MB/s write and the updated 870 QVO has doubled its lifespan compared to the former 860 QVO with the 8TB capacity warranted for 2880TBW.  This is cut in half for each capacity as we drop from 8 to 4, 2, and 1TB. Performance is maintained through Samsung’ own Intelligent Turbowrite. A bit confusing perhaps is why Samsung would then drop their warranty to 3-years for the 870 QVO from the industry standard 5-years we are seeing in others today.  It doesn’t seem so long ago that Samsung was the only manufacturer to warranty their SSDs for 10-years.

Taking a closer look at the Samsung 870 QVO SATA 3 SSD, it has a 1/3 size green 2-sided printed circuit board (PCB) situated inside a 2-piece aluminum casing which is secured by 3 torx security screws, two of which are under the branding sticker.

On the top, we see one package of QLC memory on the left, Samsung’s newest MKX ‘Metis’ SATA 3 controller center, along with a 2GB LPDDR4 DRAM cache memory chip on the right.  When considering the size of the cache to the capacity of the SSD, there is 1GB DRAM for every 1TB of storage.

On the back is another QLC memory chip, each of the two being 1TB RAW value in capacity.  This SSD provides 1863GB of total storage space to the consumer once formatted, has AES 256-bit encryption, as well as free monitoring and migration software.  A bit interesting is this Samsung comparison of the last and current generation memory in use as shown here from a Samsung internal document available to all:

Checking pricing at Amazon, we are seeing the 870 QVO available now at $129.99US for the 1TB and  $249.99 for the 2TB,  with the 4TB coming in at $499.99.  This shows the 870 QVO coming in higher than that of other manufacturers right now, most of which include the industry standard 5-year warranty compared to Samsung’s 3-year warranty.