If you are up to spec in the tech storage field, 4-bit mlc (multi-level cell) is all the rage.  If you are a typical consumer, things get just a ‘bit’ confusing.  After all, what does your search for adequate storage have to do with anything but price, warranty, speed and capacity?  Actually quite a bit (intended pun), as electronic storage is accomplished through cells where there was originally a single bit per cell, termed as slc, or single level cell.  In our review of the Samsung 860 QVO SATA 3 SSD today, we are seeing the implementation of Samsungs 4-bit mlc V-NAND for the first time. 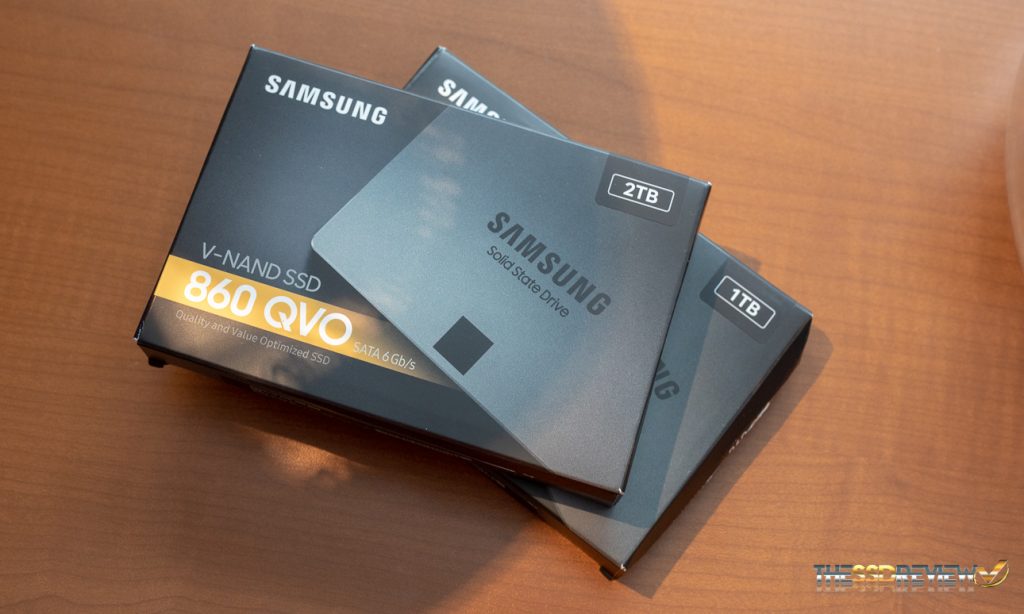 In electronics, the smallest representation of information lies in a bit.  Single level cell (single bit SSDs) had many benefits, in that they were by far the most reliable and fast, but they were also very limited in overall capacity…and expensive.  In order for flash to succeed, capacity had to be increased, price had to come down, reliability kept to an acceptable level dependent on the SSDs intended use, and speed increased as well.  So…. if we look all the way back to our first reviews back in 2007, a 32GB SSD then went for a few thousand dollars while hitting just under 100MB/s, in comparison the largest Samsung 860 QVO SSD that will reach 550MB/s and come in at $499 for the 4TB version. That’s just fourteen cents per gigabyte.  We have come a very long way…

The Samsung 860 QVO SSD is a SATA3 (6Gbps) SSD that will be available in 1, 2 and 4TB capacities, and is available only in a 2..5″ 7mm notebook form factor.  Because we are using Samsung’ latest 4-bit V-NAND in this SSD, they could just as easily push the capacity of each drive up to 16TB without the need to change anything but the PCB within.  As this is a SATA 3 drive, performance reaches a maximum of 550MB/s read and 520MB/s write with up to 97k IOPS read and 89K IOPS write, these performance variables changing slightly depending on capacity.

The Samsung 860 QVO is protected by a two piece clam shell aluminum casing which is secured with three TORX security screws on the base.  For those thinking of disassembling their drive, two of these screws are under the rear branding sticker and damaging this would void any warranty for the drive.  Inside, we find a PCB that is 1/3 the size that we might normally see in a similar competing brand.

The PCB itself contains the Samsung MJX controller that has had so much success in earlier versions of the 860 EVO and Pro, a single 64-layer V-NAND 4-bit mlc memory chip with a 1TB RAW capacity, along with a LPDDR4 cache buffer that varies in size to 1GB(1TB), 2GB(2TB) and 4GB(4TB).

Formatted, this little V-NAND chip on the left side of the shot above is 931GB.  For the 2GB version, we simply add a chip to the back as shown here:

Although both drives contained 1TB chips, the product number of the chips on the 2TB 860 QVO were K9XVGB8J1M while the 1TB chip was ‘J5M’. Still amazes me that they could just as easily build a 16TB drive by just adding the chips and increasing PCB size.