In reviewing the Samsung SSD SM825 Data Center Edition 400GB eMLC solid state drive, we understand that we have wandered off the beaten path of normal consumer reviews but there are some things in this SSD that will just grab your attention.

Although it’s interesting to see that Samsung has chosen its own premium eMLC NAND flash memory in the SM825, we believe that it is the total write endurance that truly stands out in this enterprise class SSD.

The use of Samsung’s own hand picked e-MLC NAND flash memory enables an amazing 7000TBW (terabytes written) for the 400GB sample that we are reviewing today, followed by the 200GB with 3,500TBW and 100GB with 1,700TBW.  To bring that as close  as we can to the consumer side of things, a typical consumer edition mlc drive might have a total write cycle of 60TBW which is 116 times less than the 400GB Samsung SSD SM825.

The change in TBW for each capacity is directly related to the over provisioning of each which we will elaborate on a bit later. Is anyone interested in endurance testing the SM825?  If so, you must definitely have spare time on your hands. 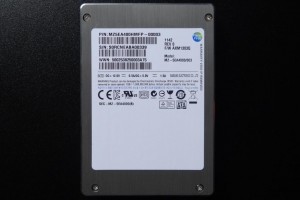 The SM825 exterior is constructed of a very sturdy brushed metal casing that serves the purpose of cooling the SSD more so than it does protection, although this case feels bulletproof.  It is an HDD thickness of 15mm thick for easy installation in data centers.

The truly unique aspect of this SSD, that we see above all others, is that it is all Samsung.  First we have the S3C29MAX01-Y330 3 Core ARM controller, which is the heart and sole of the drive, and is surrounded by a total of 16 pieces of Samsung 32nm Ep-mlc 2 bit Toggle DDR NAND Flash memory (K9HDGD8U5M-HCE0) with each module being an 8 die stack. Each piece is 32GB in capacity for a RAW total capacity of 512GB.

There are four capacitors on the rear of the drive which are used solely for data protection in the event of power loss where any information still in the cache completes its movement to the NAND even after the power is lost.