There comes a time when we all just need to stop, sit back and think; take a look around and reassess our direction perhaps.  The SSD industry is a beautiful example of this.  SSDs were introduced some 11 years ago now, although flash technology had been in use prior.  Today, there isn’t a person in the world that hasn’t been touched by this in some way or another, whether it be the Olympian monitoring health, body mass and performance, the surgeon and staff doing an operation, UNHCR flying in food relief to some spot most have never even heard of, or those few Military members way up in Alert watching weather and radar instruments. 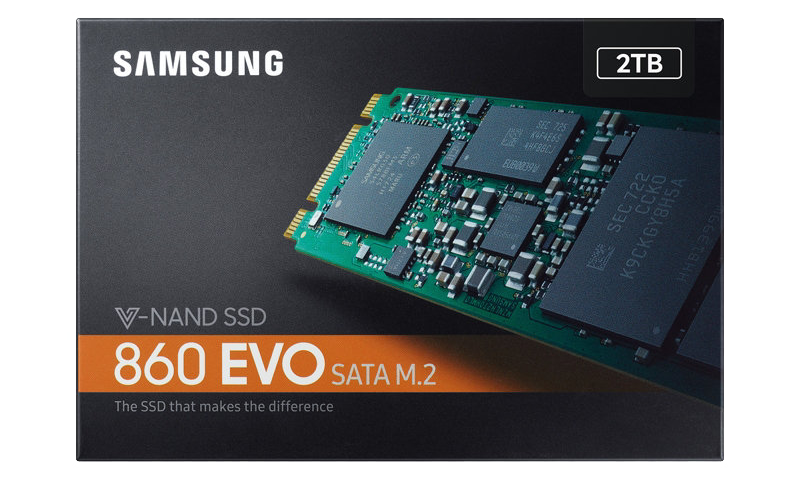 Flash technology has seen a whirlwind of advance from endurance, to capacity, price point, direction of use…and performance.  We kind of get caught up in that last point.  You can look anywhere on this site and see that we love SSD speeds.  We push and push to get our hands on the biggest and baddest, fastest SSD in the world. This is exactly where Samsung has pulled back on the reigns thinking that, at least in the case of the Samsung 860 EVO SATA 3 SSD, improving on the machine might just be better than replacing it with a faster NVMe alternative.

Even looking at it from a different angle, I would bet that we still see over 95% of personal computers equipped with a hard drive, or a SATA 3 SSD today. That is an absolutely huge chunk of the industry and one that seems to get overlooked as we try and market systems with data throuGHput capable of over 3GB/s.  What most don’t consider is that the very few people could even see the difference in typical use of a PC with a SATA3 SSD moving data at 560MB/s, or that same system with a NVMe SSD moving that same information at 6 times that speed.  Absolute fact… where you can see a massive upgrade when moving from a hard drive to SSD, the same can’t be said when switching from SSD to SSD…in typical consumer usage patterns.  Samsung recognized this with the 860 EVO SATA 3 SSD.

The angle Samsung took was, rather than build a faster controller, let’s build our MJX SATA 3 controller with more power and enable it to provide faster communication with the host system.  By doing this, we can remove the EVO from being simply a consumer product and provide much more stability in the NAS, workstation and similar business environments.  Simply put, there is a absolutely massive business market that can now trust in the Samsung 860 EVO.

A closer look at the Samsung 860 EVO 2TB SATA 3 SSD shows the Samsung MJX controller to the far left, followed by a 2GB chip of LPDDR4 cache memory, and two modules of Samsung 64 layer TLC (or 3Bit MLC) V-NAND, each with a RAW capacity of 1TB.  These are the only memory modules on this SSD which means Samsung could have easily made this a 4TB SSD by adding two more modules on the reverse.

Last but not least, the Samsung 860 EVO has AES 256-Bit encryption, Is TRIM, SMART and GC compliant, and has an average 3W power use, 4.5W in Burst mode and 2.6mW DevSlp.