Back in December, Samsung launched the 850 EVO series of SSDs in the standard 2.5” form factor. Along with the 850 PRO, these were the first SSDs to utilize Samsung’s new 32-layer 3D V-NAND technology. When combined with Samsung’s TurboWrite technology, the 850 EVO’s can attain some amazing data transfer speeds. Samsung is now expanding its lineup of 850 EVO form factors to include M.2 and mSATA versions. We just recently published a review of the M.2 version, and today we have on hand both 120GB and 1TB models of the mSATA 850 EVO to give a testing bench test drive. 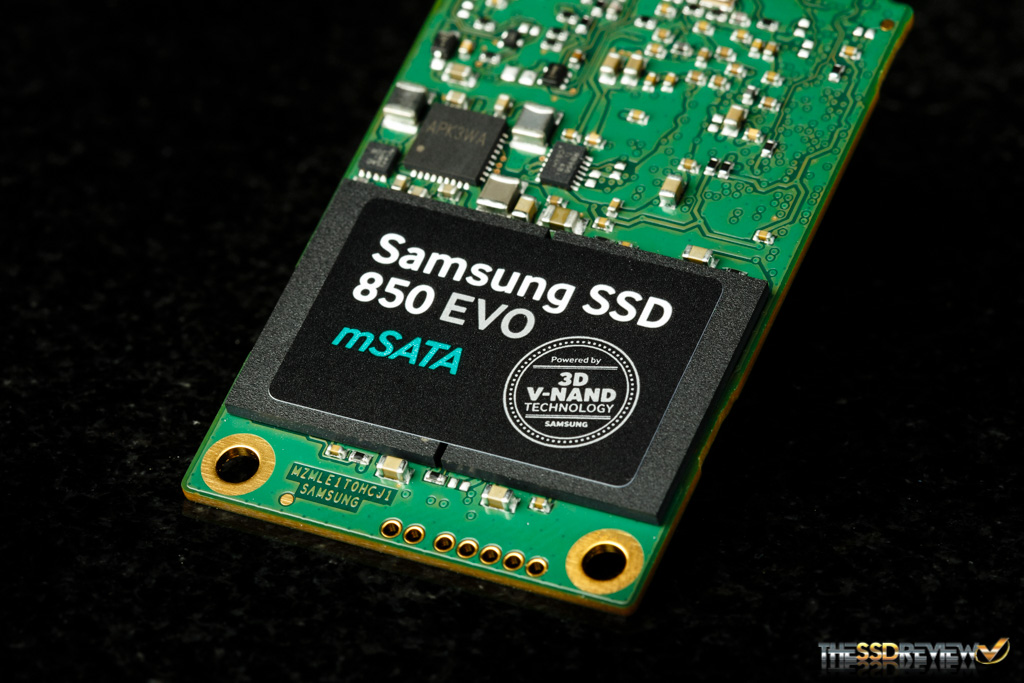 The mSATA form factor has been out for a good bit now, and we are already seeing laptops with mSATA drives or slots, and desktop motherboards that include an mSATA slot. Alternatively, there are a number of adapters available that allow you to add an mSATA drive to your system via an empty PCIe slot (although such cards only use the slot as a means to anchor the card, and are not electrically connected to any PCIe lanes – the card has standard SATA power and data connections, and connects to one of your motherboard’s SATA ports). Before they became available in larger capacities, we were seeing a number of smaller capacity versions being utilized as caching drives, utilizing caching software such as NVELO’s Dataplex (NVELO is now owned by Samsung). Now then, let’s dive into the testing and analysis of the 120GB and 1TB mSATA 850 EVO SSDs.

The 850 EVO comes with AES 256-bit Full Disk Encryption (FDE), TCG/Opal V2.0 compliance, and support for Encrypted Drive (IEEE1667), which can be easily activated with instructions from within Samsung’s Magician software. DevSleep (device sleep) mode is also offered to enhance lowered power consumption. Samsung will be updating their Magician software to version 4.6 soon, in which Rapid Mode can be enabled for this SSD. Furthermore, TRIM is supported when there is OS support. These drives feature S.M.A.R.T. drive health and monitoring attributes and garbage collection, and are covered by a five year warranty. Among the value and mainstream-tiered SSDs a five year warranty is pretty nice compared to most that have only a three year warranty.

The box that the SSD ships in is a very clean white design. This makes the green and black mSATA SSD and the lettering on the front stand out against the blank background. The back is mostly gray, white, and black, drawing your attention back to the front and the distinct color graphics showing off the Samsung mSATA 850 EVO SSD. As is typical for Samsung, the overall packaging is very professional and eye catching.

Also included in the package is a combination warranty coverage summary and user manual. As our review samples were early production drives, the packaging indicated that the 850 EVO mSATA comes with a three-year warranty; however that has since been corrected so that later packaging reflects the true five-year warranty.

Both of our review samples have a fairly standard label covering the components on the “front” side of the mSATA SSDs. These labels indicate part number, model number, serial number, capacity, voltage ratings, icons indicating compliance with various standards, as well as both bar codes and QR codes.

Looking at the “rear” of the 850 EVO mSATA SSDs, we see that the Samung “3D V-NAND” sticker is covering two NAND chips on the 1TB model (on the left), while there are none on the 120GB model (on the right).

Above are the controllers for the mSATA 850 EVOs, 120GB  left and 1TB right. The controller utilized on the 120GB model (as well as for the 250GB and 500GB versions) is Samsung’s dual core MGX controller. The 1TB model, however, utilizes Samsung’s three core MEX controller.