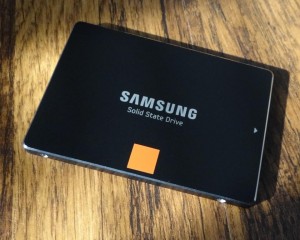 Our report on the Samsung 840 Pro SSD begins post take off from Pearson Int’l Airport in Toronto and on route to Seoul, South Korea.

Having had this SSD in our hands for some time, even the enormity of the Samsung 840 family release celebration cannot overshadow the performance of what just might be the hottest solid state drive to hit the streets to date. How does just under an extra hour laptop life and 100,000 IOPS grab you to start?

We won’t even try to explain the iron clad confidentiality agreements that have been in place in effort to keep the Samsung SSD 840 Series a complete secret up until now.  Even us few privy to the Seoul  experience have had to compile these reports without access to data sheets describing the new controller and memory in use.  Quite frankly, it is the first time I couldn’t dig this info up through a simple internet search.

The Samsung SSD 840 family will consist of the 840 Pro, intended for the enthusiast/enterprise crowd,  as well as a consumer edition 840 for the consumer.  The difference between the two lies only in the memory where the 840 will rely on triple level cell (TLC), vice multi level cell (MLC) NAND flash memory, and the firmware for the Pro version has been optimized for performance. Our analysis today examines the Samsung 512GB 840 Pro SSD and it will be available soon enough at prices that, not only rivals that of other premium SSDs but also, puts Samsung in a position similar to Crucial/Micron where they have the ability to effectively move the price point of SSDs even lower than we are seeing them now.

To put it lightly, the specifications Samsung lists for the 840 Pro are enough to make just about any storage enthusiast drool.  The 840 Pro is a SATA 3 SSD, will be available in capacities of 64, 128, 256 and 512GB and is of a 2.5″ 7mm ultra slim form factor.  Performance is listed at 540MB/s read and 520MB/s write with random read IOPS at 100,000 (yes that’s one hundred thousand) and random write at 90,000 IOPS.  Prior to writing this, I had to get Samsung to confirm the power ratings three times before print as materials listed 0.042W idle and 0.068W active. Is that even possible?  Through use of their new controller and memory it is and they have validated this through laptop testing where they found the laptops battery power was extended by just under an hour, on average.  Samsung wraps things up with their five year limited warranty

The exterior casing of the Samsung 840 Pro SSD is of typical Samsung design, 7 mm thick and is secured by four pentalobe type security screws. Once removed, access is given to a PCB with controller, cache and eight modules of memory on one side of the PCB.  The back of the PCB is void of any components.

Samsung proudly acknowledges that the new 840 Pro is 100% Samsung born and bred, with the heart of the machine being their new 3-core eight channel MDX controller (300MHz).  Just above the controller is Samsung’s 512kb DRAM cache memory with eight modules of Samsung’s new 21nm MLC DDR-2 toggle mode NAND (400Mbps), each with a capacity of 64GB.

Although the RAW capacity is advertised as 512GB, formatting leaves the end user with an available capacity of 477GB.  Included with the 840 Pro will be the updated version of Samsung Magician 4.0 software which will enable users to manually configure between 7 and 24 percent of their drive for over provisioning, depending on their needs.  The Magician also contains disk scan and error reporting for monitoring health status as well as SecureErase which completes in under a minute.