It was just a few days back that Corsair announced the news of their upcoming release of the F90 and F180 solid state drives, both member of their Force Series of SSDs with capacities of 90 and 180GB respectively.

We found a very interesting bit of information in this release that seems to run along the same course of many of our SSD reviews of late and it is news that should be very exciting to the consumer.

The 4k random write thoroughput of the F90 and F180 has now been increased to a thoroughput of up to 50,000 which now matches that of enterprise-level SSDs and this is done through a recent release of SandForce firmware only available in new drives.  In fact, we can even say that this firmware equals and sometimes surpasses that of the SF-1500 drive and a little known fact is that the SF-1200 and SF1500 are actually identical processors in hardware composition.

This may seem a bit odd to some but it is actually a very normal business characteristic of just about any industry with another great example being the Intel i7 CPU. It is available in several different power capacities, however, many are not aware that the sole difference in each (other than the Extreme series) is simply the firmware or CPU software itself. Thanks to our ASUS Rampage motherboard, we are able to simply click an option and our i7 930 runs at the i7 965 level of 3.2Ghz but a a considerable price savings.

The question that can then be asked is if SandForce is really putting out the SF-1500 in the skin of a SF-1200 consumer SSD which is of great benefit to the consumer?

Without further delay, lets thank Robert Pearce, Corsairs Senior Technical Marketing Consultant, for giving us first crack at reviewing the F90 90GB SSD and lets see what this new release is capable of!

The Corsair F90 90GB arrived at our door step within a day of our speaking with Corsair which, in itself is a great feat as 2700 miles and a temperature drop of 38DegF separates us. It is pretty cold in the Great White North right about now. The product is packaged in the smallest container we have seen yet measuring just over 5″x4″x1″ and contains the SSD and a 3.5″ desktop adapter for those notebook enthusiasts which was great to see. 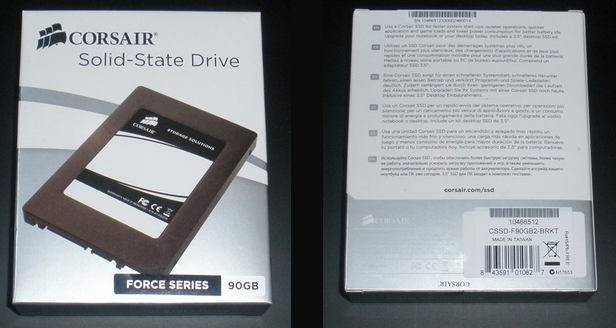 As the drive is not yet on the market, we cannot list its detailed specifications but can relate that the drive is a 2.5″ notebook SATA 2.0 3Gb/s SSD, has the latest generation SandForce SF-1200 processor which is capable of 285MB/s read and 275MB/s write speeds along with the previously mentioned 50,000 IOPS 4k random performance. This is particularly important because, other than SSD seek times, the 4k random write disk access method is that which is most in use, not only by the consumer in typical system operations, but also, in the server environment as well.

The model number of the F90 is CSSD-F90GB2-BRKT and the F180 is CSSD-F180GBP2-BRKT. It contains the SandForce SF-1222TA3-SBH processor and 12 chips of Intel 32nm NAND flash memory, each having 8GB of storage capacity for a total of 96GB. Eight GB of NAND is proprietary to the firmware and inaccessible by the user which brings us just below our advertised capacity of 90GB. Formatting reduces the total available space to 84GB for end user availability.

For those not familiar with Over provisioning, it is a great benefit to solid state drives containing the SandForce processor as it maximizes the life and performance of the drive. Unlike drive corruption of a hard drive which reduces capacity and can affect its performance significantly, should a SSD cell malfunction, the SSD will automatically remap a fresh cell from over provisioning without the users knowledge and without performance or capacity decrease.

The first few times we opened up solid state drives in review, many manufacturers expressed their discourse until we explained the reasoning of such which is actually twofold. The first reason is that we believe that with our doing such, the consumer will have no need to follow suit thus voiding their warranty and possibly damaging the drive. The second reason is that we believe that, for those just considering SSD purchase, this is the best way to truly understand the difference between a hard drive and solid state drive.

It gives us a clear picture of the SF-1222 processor and the arrangement of the Intel 32nm NAND.

Lets hope Corsair understands our methodology in disassembly and we see much more of the at The SSD Review in the future!