If we take a look at the card itself, we find out that there are a few more components than the typical solid state drive. The first thing we noted right off was the two SandForce SF-1200 processors which falls into the working principle that we discussed with respect to RAID 0 earlier. On either side of the card, there are also 16x4GB Intel NAND flash memory chips which brings the total to 2x64GB or 128GB of NAND storage. 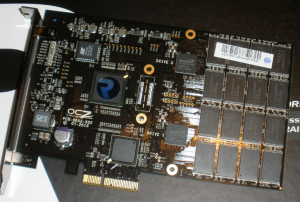 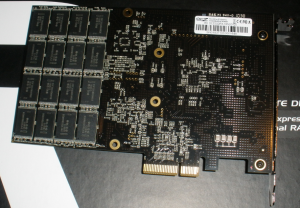 As per the norm with SandForce driven products, a certain amount of NAND is dedicated to over provisioning to enhance the performance and total life span of the drive and that is 8GB (2 NAND chips) bringing down the user available storage to 120GB as advertised. 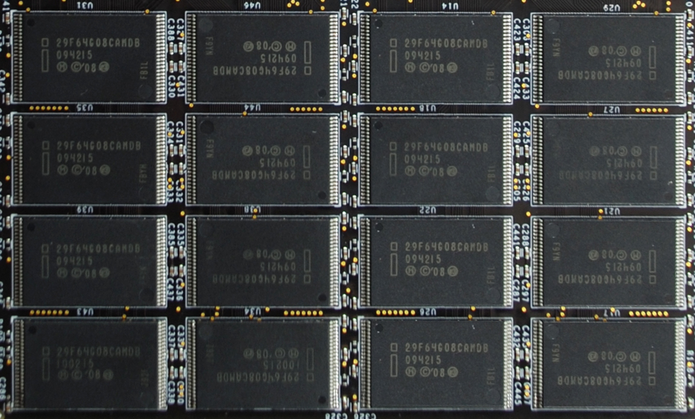 Also very prominent is the big ‘R’ aboard the Silicon Image SiI3124 RAID 0 controller. Regardless of its size, this controller houses 4x3Gbps SATA ports which allows for greater expansion with the card in the future. The key to this controller is that the PCIe card is now a fully bootable device capable of running your computer at much higher speeds than the former bottlenecked SATA II drives. The trade-off of course is that RAID controllers, as of yet, are not TRIM compliant which is not an issue with the RevoDrive and its inclusion of the SandForce SF-1200 processors. The SF-1200 utilizes over provisioning and DuraClass technology to maintain the drives performance over time which, quite frankly, just may make TRIM a thing of the past.

Below and to the right of this is also the Pericom PI7C9X130 PCIe/SATA Bridge Chip which allows communication to the PCIe bus itself and, as well, the Wurth Electronics power inductor (WE 7443552150) and 5124K x8CMOS Multi-Purpose Flash (MPF) manufactured with SST proprietary, high performance CMOS SuperFlash technology in the SST 39VF040 chip. 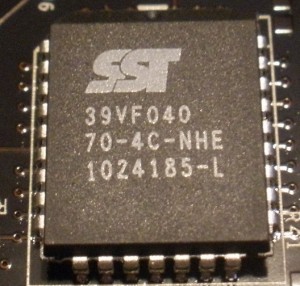 For those new to opening your computer up, the appearance alone of such a device can be daunting. Fear not though as it is as simple as turning the computer off, opening up the case, clicking it into a x4, x8 or x16 PCI-Express slot and rebooting.

That simply wouldn’t do this card justice though. To truly experience the speed that this drive has, it is best suited as a boot disk and the best recommendation one will ever receive with solid state drives is that it be accompanied by a fresh installation of Windows, although not necessary. This comes from the hundreds of e-mails and forum replies where users have experienced sub-normal performance from their SSD drives after migrating from their former hard drive environment. The fresh install is really a simple process.

Installing this drive really is as simple as that but, if you have any problems whatsoever, OCZ Support Forums or Tech Support are just a click or call away. 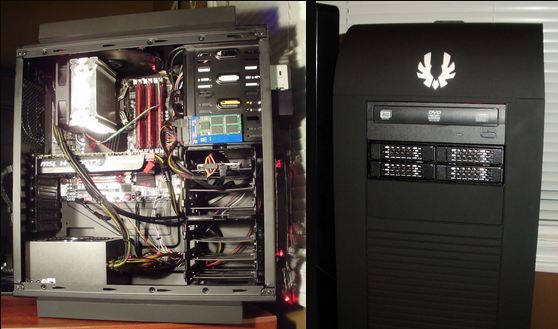 Software used for testing by The SSD Review consists of Crystal Disk Mark, HDTune Pro, ATTO Benchmark, along with FutureMark PCMark Vantage. The first three do a great job of showing us the numbers that we want to see, or dont want to see in some cases, while PCMark Vantage x64 is an excellent program which recreates tests that mimic the average users activity, all the while providing a medium to measure each.

In order to ensure accuracy of tests throughout the evaluations, tests may be repeated or conducted in safe mode to confim consistency throughout and eliminate any possibility of a wild card result. Safe mode may be utilized as well as any other number of set criteria to ensure that tests conducted at present do not differ from those conducted in the past. Where comparative SSDs are still in the possession of The SSD Review, we will follow every opportunity to gain fresh test evaluations from sample media.