Only once before had we ever reviewed an SSD that only contained a single controller and a single NAND chip; this was the Samsung 980 DRAM-less SSD.  Much like the 980, our SSD today is a 1TB SSD that is DRAM-less and hits over 3GB/s read and write with a price point of just over a hundred bucks. Direct competition…oh ya. Coupled with the demographic of DRAM-less haters that just stopped reading this article with the mention of that word… DRAM-less.  Get ready though…. this SSD is no slouch. 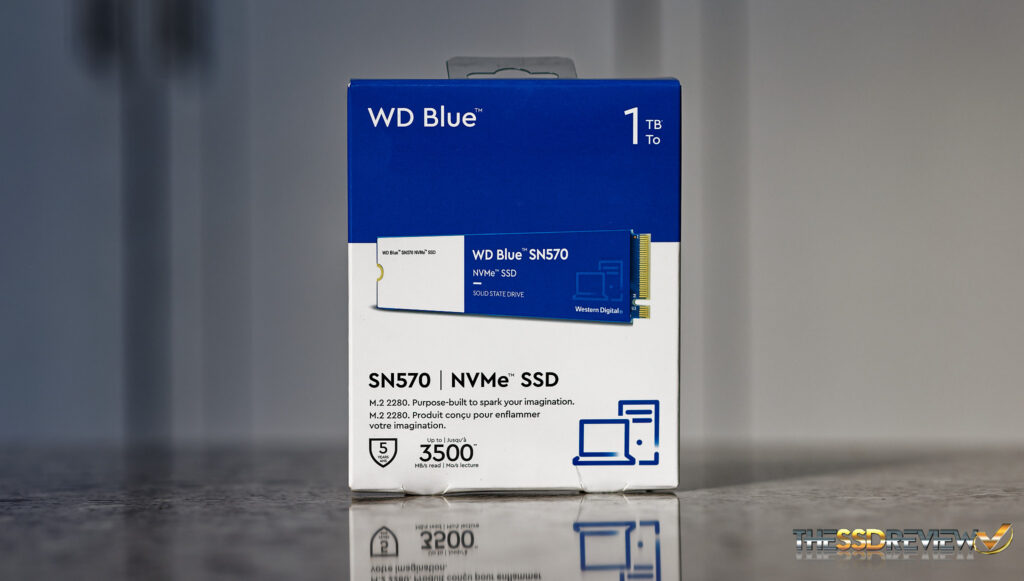 Let’s start things along by saying that the name WD Blue SN570 is not really fitting for this SSD as it has nothing whatsoever in common with its predecessor, the SN550.  Both are DRAM-less and this fact alone has always been a conversation in itself.  Should one ever consider a DRAM-less SSD for their own use?  And that is EXACTLY the point that needs to be considered…ones own use.  In one respect, we will guarantee this SSD will be a hit because of performance and value, and that the majority of people won’t give a second thought to it being DRAM-less. That success has also been seen with the Samsung 980.

But that has always been the case.  The typical user would never know the difference between a DRAM-less SSD and any other in their typical PC use pattern.   In fact, even experts could never tell the difference in typical user scenarios.  Would we be recommending this for high end media developers?  No.  Absolutely not.  But we guarantee that this single-sided, single chip, single controller SSD will be finding itself in places that previous DRAM-less SSDs (other than the 980) never have.  It is just that good and we think many will find this report very refreshing as it shows an SSD from both the value and performance perspective.

The WD Blue SN570 is a single-sided M.2 2280 (80mm) form factor PCIe 3.0 SSD that contains a WD/SanDisk proprietary SSD controller and a single NAND chip.  This NAND chip is a 1TB chip, the only on the device, and we are going to take a leap and ‘suggest’ that this SSD contains the newest BiCS 5 3D TLC 112-layer NAND flash memory available today.

WD provides its SSD Dashboard free of charge in order to maintain ones SSD, as well as Acronis True Image for migrating over to the SN570 or other WD/SanDisk SSD.  Both can be found here.