Want to look into the future just a bit?  The picture below shows the latest Toshiba BG4 NVMe 1TB Client SSD and it is just about the same size as an SD card.  To the left and not a competitor brand, we have the Lexar 1TB SDXC card and it reaches great speeds of 95MB/s….which is pretty much it for typical SD card use in the world today.  Both are able to store industry high capacities of 1TB, however, it is the speed that sets them apart, which is rather shameful actually. 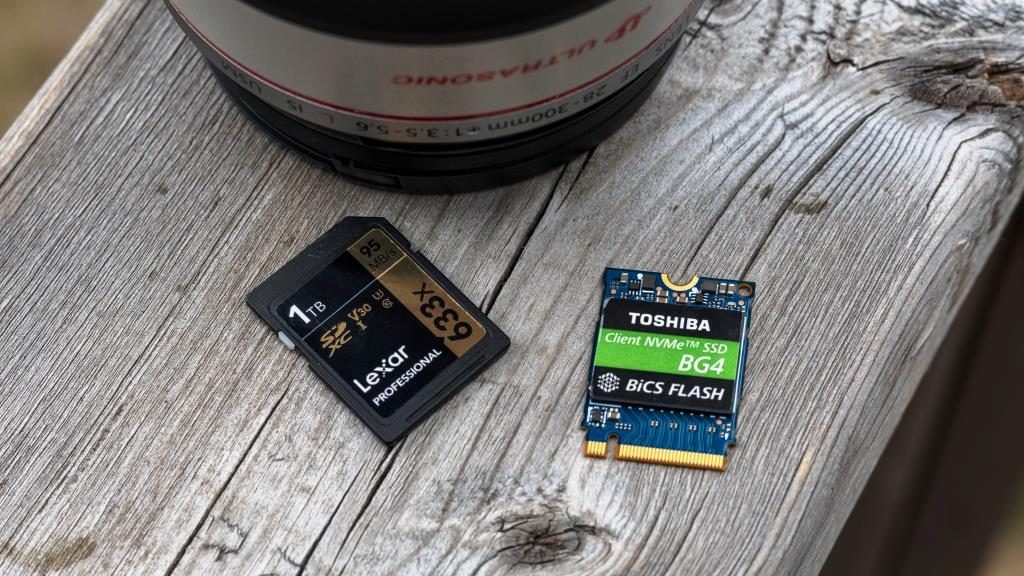 The Lexar 633x maxes out at 95MB/s because it is an SDXC card and that is the industry standard. Digital equipment that uses these cards has yet to catch up. The Toshiba BG4, which is actually smaller than the SD card, is capable of an industry leading speed of 2.3GB/s, all this from a single package design.  Imagine this replacing the SD card in your DSLR camera.  Ever get nailed by a full buffer at just the wrong time while shooting a wedding?  The cause of this has to do with the fact that pictures cannot be moved to storage quick enough.  The fact is that integrating the BG4 in any camera would revolutionize the industry, especially for camera professionals.  Pictures could be taken and stored 23 times faster. 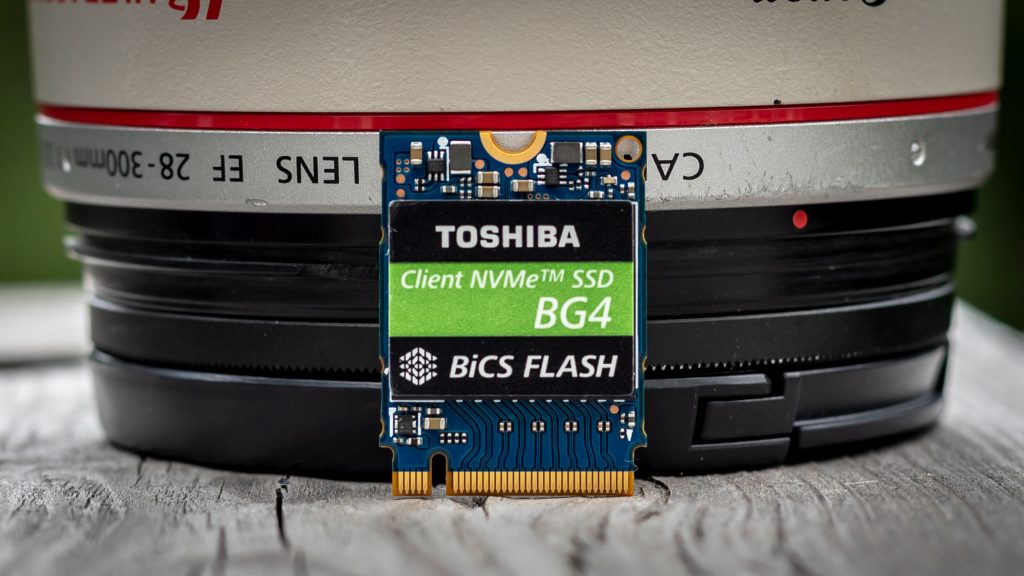 Now imagine other possibilities… Motherboard integration on computers….an all in one design with speedy SSD and 1TB of storage.  Smartphones, drones, video surveillance… this is just a bit larger than a quarter and could be embedded just about anywhere.  For our review, however, this Toshiba BG4 1TB NVMe SSD is being looked at as a client SSD for ultrabooks and other typical consumer applications.

The Toshiba BG4 Client SSD is available in capacities of 128, 256, 512GB  and 1TB and is a M.2 2230 (30mm) form factor SSD.  It is only 30 mm long.  It is of a single package design which means the SSD controller, the 1TB of 96-layer BiCS 4 NAND flash memory and any buffer are all contained within a single chip, along with firmware.  That chip is situated on a PCB and connects to the board by a BGA (ball grid array)  hence the naming convention of BG4. 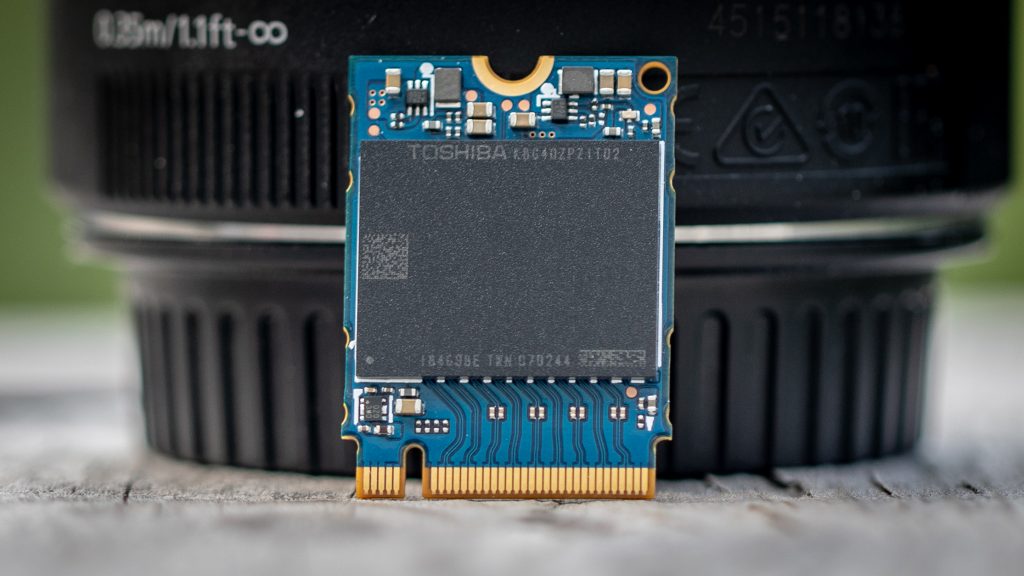 Performance increases with capacity and the 1TB version we are testing today is rated at  2.3GB/s read, 1.8GB/s write, 330K IOPS read and 190K IOPS write at low 4K disk access with an active power usage of up to 3.7W. In contrast read performance doesn’t change much on the lowest volume 128GB version at 2GB/s, but performance drops to 800MB/s and IOPS drop to 200K read and 150K write.  This of course is no concern to the typical PC user as they very rarely, if ever, do anything that requires the SSD to truly prove its ability. 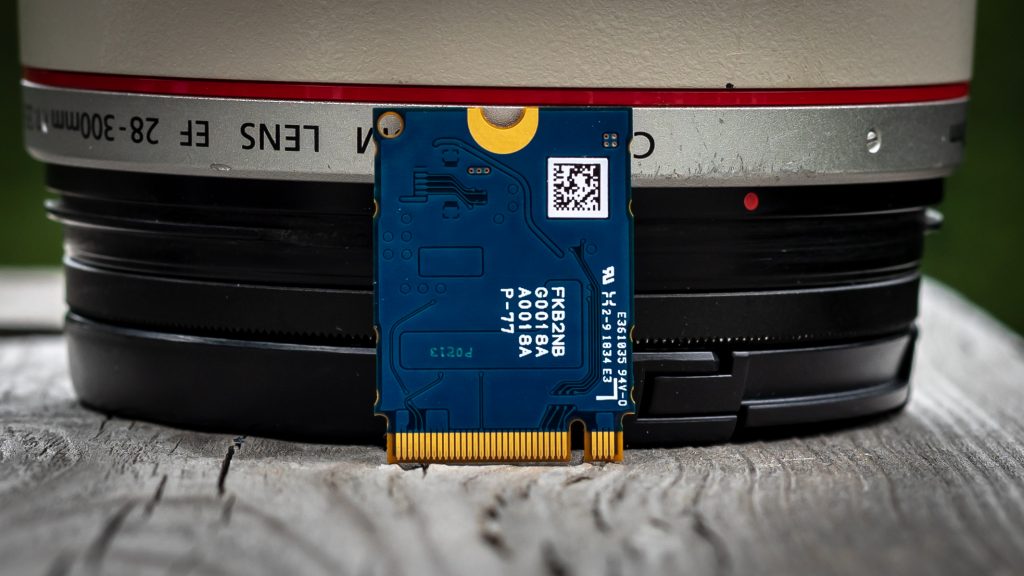 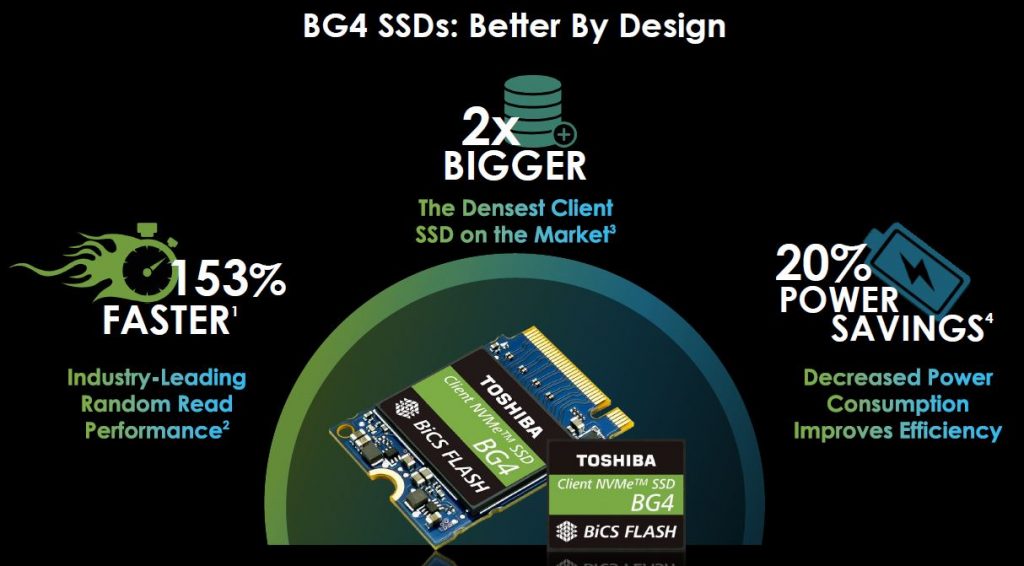