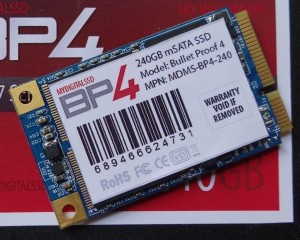 Perhaps one of the hottest tech items to hit in the last year is the ultrabook, a laptop typically measuring under 1/2″ thick, weighing less than 3 lbs, having performance as high as 1GB/s transfer speeds and being capable of up to ten hours battery life.

As new and amazing as the ultra is, the consumer also learned of the solid state drive and, more specifically, the mSATA SSD measuring 1/3 the size of a credit card, just over 3mm thick and weighing just under 7gm.

As with any other new technology, such things as storage capacity are considered premium and, even now, we are seeing systems sell for as much as $500-$750 more, simply the result of a storage upgrade from 120 to 240GB. The smart consumer is one who buys the lower capacity system with full intent of upgrading the SSD themselves and, in doing so, saves themselves hundreds of dollars.

If you are one of these consumers, you have come to the right place because our SSD analysis today is on the newly available MyDigitalSSD BP4 240GB mSATA SSD, this SSD quite possibly being the best value for the money on the market right now.

ABOUT THE MYDIGITALSSD BP4 MSATA SSD

The BP4 is a SATA 3 mSATA SSD measuring only 49x31x3mm and weighs about 6 grams in total. The picture on the right above depicts the SSD on my business card.  This SSD is available in capacities of 30, 60, 120 and 240GB and performance specifications are listed at 550MB/s read and 520MB/s write transfer speeds.  The BP4 comes with a limited three year warranty and any removal of the front branding sticker will automatically void that warranty.

A quick check of Amazon

The MyDigitalSSD BP4 SATA 3 mSATA SSD contains the Phison PS3108-S8 controller, much the same as the previous generation BP3 that we reviewed, and the memory has been upgraded to the newer Toshiba 19nm Toggle Mode NAND flash memory (TH58TEG9D2HBA89) from the previous size of 24nm.  There is also a NANYA DRAM DDR3-1333 256MB Cache module on board.

Total RAW capacity of the BP4 is 256GB (64×4), however, MyDigitalSSD has overprovisioned this drive to provide for sustained performance and endurance and it is being marketed as a 240GB capacity SSD.  Once formatted, there is 224GB storage available for consumer use.