Well I guess the secrets out by now.  Intel has this morning officially released it’s new enthusiast level Intel 520 Series SSD and it is none other than ‘SandForce Driven’.  What’s that, you say!?

Our report today is a complete analysis of the Intel 520 240GB 6Gbps SSD and I would be remiss if I didn’t mention that this is only a prelude to the big event.  As luck may have it, Intel has sent us three (3) Series 520 SSDs to do what only we can truly do for the drives.  Get ready for some amazing RAID testing!

GET READY FOR ROUND TWO 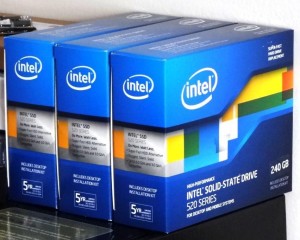 It wasn’t an easy task and, quite honestly, I will feel much more comfortable once they are back in my hands, but these 520’s have seen more international air travel than many SSDs ever do.

The reason for this is that, after the absolutely amazing RAID reports that Paul Alcorn has pulled off for our site in the past, I would be foolish to think that I could do justice to these drives as only Paul can, thanks to the help from companies such as LSI and Areca.

This meant a second trip for the 520’s from Niagara, Canada to Witchita, Kansas, where Paul is ripping them apart as we speak, and then another trip back on completion…right Paul?  In the end, this means that there will be a ‘Round Two” to this report which, as much as it pains me to say, will probably make our efforts today seem trivial in nature. If I were a betting man, I might watch our site closely for the next few days as the exact day of release can’t be guaranteed just yet.

UPDATE:  We have posted Round Two with an amazing 1.5GB/s result from just three Intel SSDs here!

For me personally,  this release is probably one of the most exciting yet as we were the first to ‘walk the plank’ in announcing it’s inevitability way back in March of 2011.  The massive response we received, and observed throughout the web, was unexpected as we were criticized (or rather bludgeoned) for publishing such an outrageous presumption without fact.  That was a bit of an eye opener for two reasons, the first being that I had never really considered the web-wide impact we had with respect to our articles.  The second was just a bit of validation that people were actually paying attention to what we had to say.  I simply thought that we were having a bit of fun (a great deal actually) doing what we do and people world wide would stop by for a read.

I guess it was time for us to pull our socks up!  So we did… by publishing our second article in April, followed by another in December 2011 which finally got some of the critics off my doorstep thanks to T-Gathering who were the first to publish snapshots of the Series 520 specifications.

At the end of the day, the truth is that I had been following nothing more than an educated guess based on the partnership formed between Intel and SandForce at IDF 2010, where they introduced Intel’s new 25nm NAND flash memory.  There was also a statement once made by an Intel executive who related that, prior to the release of the Intel X-25m, Intel hadn’t any intentions of producing SSD controllers ‘in house’, however, they couldn’t find the quality that they would have expected externally. Oh…and yes there were those posted SandForce speeds in Intel’s early road maps which were somehow leaked to the world.

Exterior packaging for the Series 520 consists of an attractive cardboard exterior which lists the highlights of the 520 in several languages.

If you want to get a better look at the pictures, simply click on any of them for higher resolution shots.