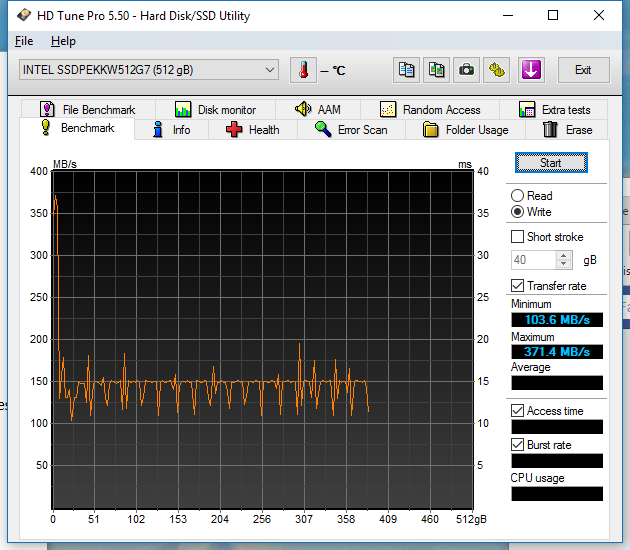 In HDTune we can see that the Intel 600P’s write drops off to around 130MB/s-150MB/s average after the SLC buffer is full.

In testing, today, the Intel 600P delivered speeds that exceeded SATA’s potential. In ATTO it reached 1.89GB/s read and 565MB/s write. In Crystal Disk Mark, it showed some very good 4K QD1 results, 38MB/s read and over 200MB/s write. In AS SSD it scored 1710 points, which is better than any other SATA drive out and it achieved 128K/124K read/write IOPS. In Anvil, again, its performance was greater than that of any SATA SSD we have tested. It achieved 7.5K points and reached 130K IOPS write performance, which verifies Intel’s performance specification.

Moving onto PCMark 8, we saw the Intel 600P’s score trumped all of the SATA competition, though not by much in some cases. All the other PCIe SSDs, even the non-NVMe drives, delivered a higher bandwidth result. This is mainly due to the Intel 600P’s lower write speed that compares to SATA SSDs.  In PCMark 8 Extended, we can see that performance is similar to what we saw with the Samsung 960 EVO. During the heavy workload phases, it lagged behind the competition, but during the light workload phases, it performed on par with the rest of the PCIe SSDs. 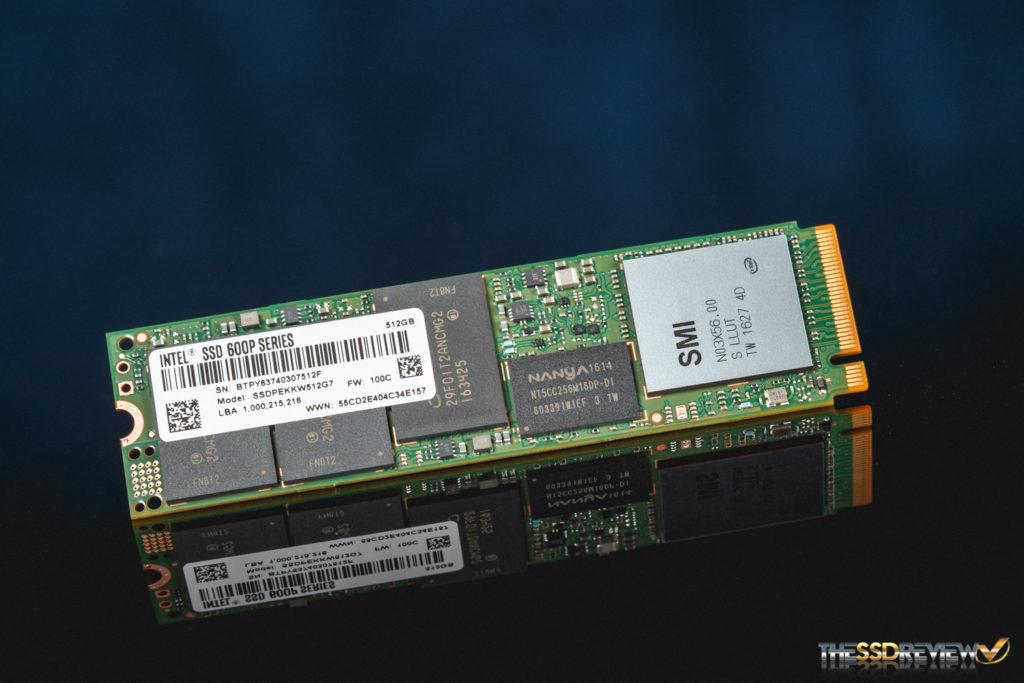 Next, during our 30GB transfer test we saw that the Intel 600P delivered an average write speed of 285MB/s. This is due to the SLC cache being smaller than the actual test data and once the SLC cache was full, write performance dropped down to the low 100MB/s range. This result also didn’t do the 600P any good in the efficiency comparison. There it was also dead last. It did, however, show the best result yet for idle power consumption where it averaged 0.92W at idle.

Finally, just to show off the base write performance once the SLC buffer is full, we turned to HDTune. Once full, we saw that write performance drops to about 130-150MB/s. So, if you are cloning/moving over a large set of data from an old drive, be prepared to see slower performance than what is advertised. Luckily this type of write workload would be rare.

This gum stick NVMe drive may not be the best performer in its class, but because of its price, it’s no wonder they are selling so well. It is the lowest cost NVMe PCIe SSD in the market. Looking at the online retailers we can see the majority of reviews are positive and reliability doesn’t seem to be an issue, which we can take for granted sometimes when we only get a short period of time to review these drives ourselves. But, if something does happen to your drive, Intel will have you covered by their 5-year warranty, as long as you don’t go over the endurance rating, of which, is pretty good for a TLC drive. 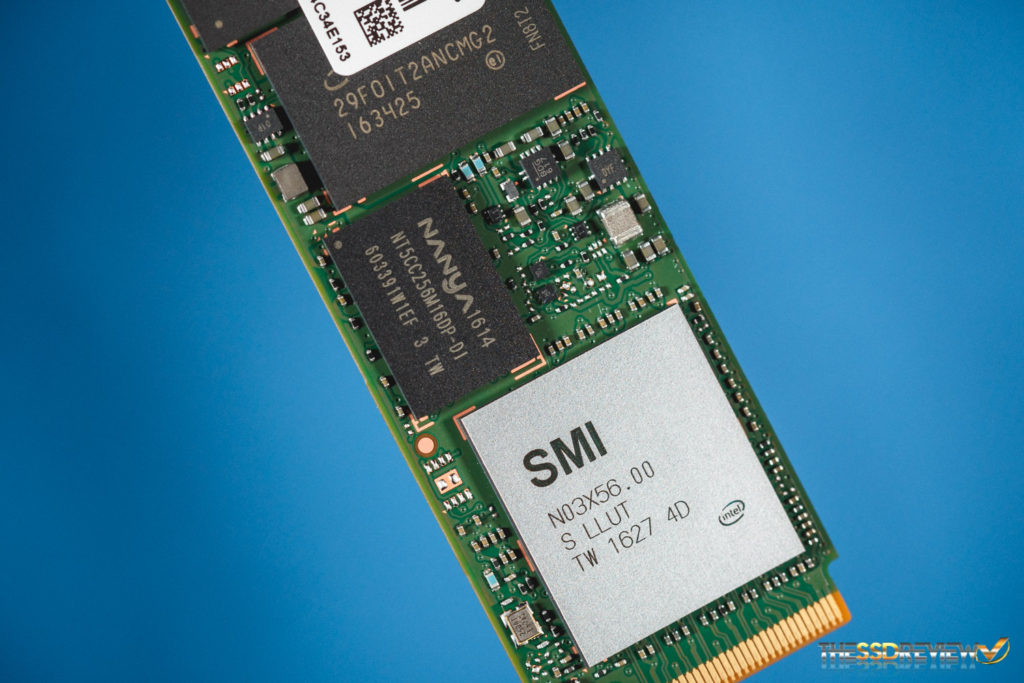 For those on tight budgets, but want to have a taste of NVMe performance, the Intel 600P is THE entry level NVMe SSD to buy. As long as you know what you are getting into with its write performance, you should have no qualms with this SSD. Read performance is great at over 1.8GB/s. This SSD may not be the best drive to get as a write cache, but would be great for read purposes in a media creation workflow. You could stream a few 4K videos from this SSD no problem, it’s just the initial write that will be slow, but when most performance SD cards read at just 95MB/s, that shouldn’t be an issue for most hobbyists. Looking at this SSD from a gamer’s perspective, PCMark 8 didn’t show much difference between the Intel 600P and other SATA SSDs, but when it comes to having larger modified, open world type games, such as GTA, Skyrim, and Witcher III, for example, this SSD’s read performance should set it farther ahead. 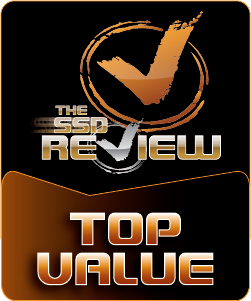 Check out the Intel 600P at Amazon Today!

The Intel 600P is the cheapest NVMe PCIe SSD in the market. With prices that are nearly comparable to SATA SSDs, it offers read speeds that are 3-4 times faster...although write performance is similar or worse in some cases when the SLC buffer runs out. This, shouldn't be a big deal for many in the consumer market and most who buy this SSD will be completely satisfied with the performance. If you are on a budget, but want to spend a few extra $ on this PCIe SSD over a SATA competitor, we have no problems recommending this SSD to you. But, if you need higher write performance for your workflow, we would recommend something else.

Passed my first test-At least 8K-IOPS-QD1.
Failed my second-Must write 200+ after buffer
can’t have it bottleneck my spinning rust.

The ATTO results make sense as the 600p doesn’t have a controller that supports direct to die algorithm to relieve the bottle neck that occurs once the SLC cache is full. That being said very few program reads, go above 128K in windows. So, everything past that is just large file transfer, and really inconsequential in day to day compute performance outside of OS install.

[…] Intel’s 600p and Professional 6000p are the one drives impacted at the moment. Picture by TheSSDReview […]